Catholic Ideas for a Secular World

This interdisciplinary series features authors from around the world who will expand the influence of Catholic thought on the most important conversations in academia and the public square. The series is “Catholic” in the sense that the books will emphasize and engage the enduring themes of human dignity and flourishing, the common good, truth, beauty, justice, and freedom in ways that reflect and deepen principles affirmed by the Catholic Church for millennia. It is not limited to Catholic authors or even works that explicitly take Catholic principles as a point of departure. Its books are intended to demonstrate the diversity and enhance the relevance of these enduring themes and principles in numerous subjects, ranging from the arts and humanities to the sciences.

Open Series: If you are an author with a proposal that seems to fit in this series, please contact Center's Scholarly Research & Publications Program Manager Margaret Cabaniss. 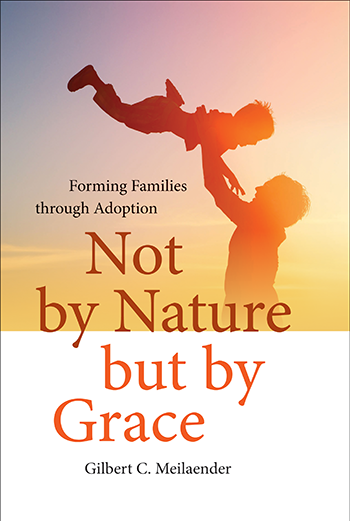 Not By Nature but by Grace: Forming Families Through Adoption
By Gilbert C. Meilaender

Working from within the contours of Christian faith, this book examines the relation between two ways of forming families—through nature (by procreation) and through history (by adoption). Christians honor the biological tie between parents and children, for it is the work of God in creation. Yet Christians cannot forget that it is adoption, and not simply natural descent, that is at the center of the New Testament’s depiction of God’s grace. Gilbert Meilaender takes up a range of issues raised by the practice of adoption, always seeking to do justice to both nature and history in the formation of families, while keeping at the center of our vision the truth that it is not by nature but by grace that we can become adopted children of the one whom Jesus called his Father.

Meilaender begins with reflection on the puzzling relation of nature and history in forming families and proceeds to unpack the meaning of huiothesia, the word used in the New Testament to name the grace by which a follower of Jesus becomes an adopted child of God. That perspective is applied to a range of questions that regularly arise in Christian theological discussions of adoption: Is adoption only for the infertile? Should single persons adopt? Is it wise for adoption to take place across racial or national boundaries? Special attention is paid to the relation between adoption and new reproductive technologies and to what is called “embryo adoption.”

Interspersed between the chapters are letters written by the author to his own son by adoption. But if the argument of the book is taken seriously, these letters are written not to one who falls within a special category of “adopted son or daughter,” but to one who is, simply and entirely, a son or daughter.

Gilbert C. Meilaender is the Richard and Phyllis Duesenberg Chair in Theological Ethics at Valparaiso University and the Paul Ramsey Fellow at the Notre Dame Center for Ethics and Culture. One of the nation’s preeminent bioethicists, Professor Meilaender has written extensively on the body, human identity, and the meaning of emerging technologies. He is a Fellow of the Hastings Center and was a member of the President’s Council on Bioethics from 2002 to 2008.