Open Series: If you are an author with a proposal that seems to fit in this series, please contact Center's Scholarly Research & Publications Program Manager Margaret Cabaniss. 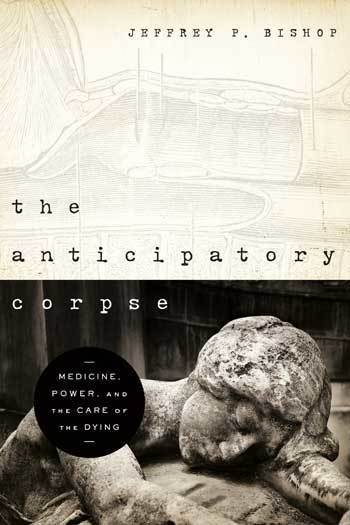 The Anticipatory Corpse: Medicine, Power, and the Care of the Dying
Jeffrey P. Bishop

In this original and compelling book, Jeffrey P. Bishop, a philosopher, ethicist, and physician, argues that something has gone sadly amiss in the care of the dying and in our social and political views of death, as shaped by our scientific successes and ongoing debates about euthanasia and the “right to die”—or to live. The Anticipatory Corpse: Medicine, Power, and the Care of the Dying, informed by Foucault’s genealogy of medicine and power, as well as by a thorough grasp of current medical practices and medical ethics, argues that a view of people as machines in motion—people as, in effect, temporarily animated corpses with interchangeable parts—has become epistemologically normative for medicine. The dead body is subtly anticipated in our practices of exercising control over the suffering person, whether through technological mastery in the intensive care unit or through the impersonal, quasi-scientific assessments of psychological and spiritual “medicine.”

The result is a kind of nihilistic attitude toward the dying and troubling contradictions and absurdities in our practices. Wide-ranging in its examples—from organ donation rules in the United States to ICU medicine to “spiritual surveys,” from presidential bioethics commissions attempting to define death to high-profile cases such as Terri Schiavo’s—The Anticipatory Corpse explores the historical, political, and philosophical underpinnings of our care of the dying and, finally, the possibilities of change.

Thisground-breaking work in bioethics will provoke thought and argument for all those engaged in medicine, philosophy, theology, and health policy.

“With extraordinary philosophical sophistication as well as knowledge of modern medicine, Bishop argues that the body that shapes the work of modern medicine is a dead body. He defends this claim decisively and with urgency. I know of no book that is at once more challenging and informative as The Anticipatory Corpse. To say this book is the most important one written in the philosophy of medicine in the last twenty-five years would not do it justice. This book is destined to change the way we think and, hopefully, practice medicine.” — Stanley Hauerwas, Duke Divinity School. 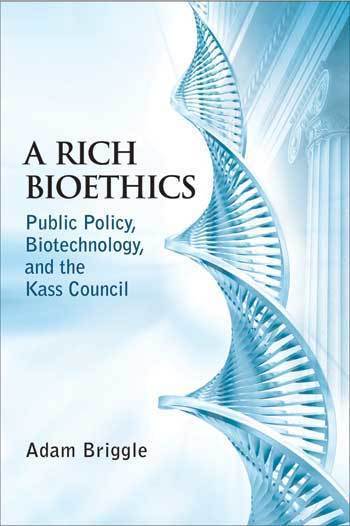 Several presidents have created bioethics councils to advise their administrations on the importance, meaning, and possible implementation or regulation of rapidly developing biomedical technologies. From 2001 to 2005, the President’s Council on Bioethics, created by President George W. Bush, was under the leadership of Leon Kass. The Kass Council, as it was known, undertook what Adam Briggle describes as a richer understanding of its task than that of previous councils. The council sought to understand what it means to advance human flourishing at the intersection of philosophy, politics, science, and technology within a democratic society.

Briggle’s survey of the history of U.S. public bioethics and advisory bioethics commissions, followed by an analysis of what constitutes a “rich” bioethics, forms the first part of the book. The second part treats the Kass Council as a case study of a federal institution that offered public, ethical advice within a highly polarized context, with the attendant charges of inappropriate politicization and policy irrelevance. The conclusion synthesizes the author’s findings into a story about the possible relationships between philosophy and policy making.

A Rich Bioethics: Public Policy, Biotechnology, and the Kass Council will attract students and scholars in bioethics and the fields of science, technology, and society, as well as those interested in the ethical and political dilemmas raised by modern science.

Adam Briggle is assistant professor of philosophy at the University of North Texas.

“This is the most persuasive and thoughtful reconstruction of the Kass Council’s goals and rationale that I have seen. Adam Briggle’s account of the notion of a ‘richer’ bioethics is comprehensive and well-reasoned.” — Jonathan D. Moreno, University of Pennsylvania

“Adam Briggle has written a rich and sympathetic account of the President’s Council on Bioethics led by Leon Kass. It puts in historical context the efforts of this council to move beyond the limited ‘instrumentalist’ approaches to bioethics taken by earlier commissions, toward a more philosophically serious effort to deliberate on the human goods put in play by modern biomedicine. In the process, it answers many of the charges of politicization and corrects the record concerning the council’s work.” — Francis Fukuyama, the Johns Hopkins School of Advanced International Studies 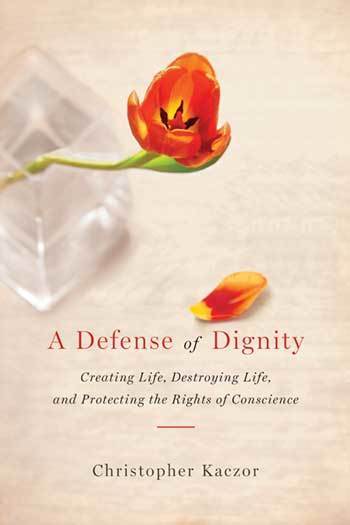 A Defense of Dignity: Creating Life, Destroying Life, and Protecting the Rights of Conscience
Christopher Kaczor

Questions about the dignity of the human person give rise to many of the most central and hotly disputed topics in bioethics. In A Defense of Dignity: Creating Life, Destroying Life, and Protecting the Rights of Conscience, Christopher Kaczor investigates whether each human being has intrinsic dignity and whether the very concept of “dignity” has a useful place in contemporary ethical debates. Kaczor explores a broad range of issues addressed in contemporary bioethics, including whether there is a duty of “procreative beneficence,” the ethics of ectopic pregnancy, and the possibility of “rescuing” human embryos with human wombs or artificial wombs. A Defense of Dignity also treats issues relevant to the end of life, including physician-assisted suicide, provision of food and water to patients in a persistent vegetative state, and how to proceed with organ donation following death. Finally, what are the duties and prerogatives of health-care professionals who refuse in conscience to take part in activities that they regard as degrading to human dignity? Should they be forced to do what they consider to be violations of the patient’s well-being, or does patient autonomy always trump the conscience of a health-care professional?

Grounded in the Catholic intellectual and moral tradition, A Defense of Dignity argues that all human beings, from the beginning to the end of their lives, should be treated with respect and considers how this belief should be applied in controversial cases.

Christopher Kaczor is professor of philosophy at Loyola Marymount University in Los Angeles. He is the author and editor of a number of books, including The Ethics of Abortion: Women’s Rights, Human Life, and the Question of Justice.

“A Defense of Dignity provides a skillful, informed, and clear philosophical analysis, from a natural law perspective, of a range of controversial, and sometimes complex, bioethical questions concerning the beginning and end of life. Few authors approach bioethics from a natural law perspective, and few do it as well as Christopher Kaczor. The book should be of interest not only to natural law philosophers and their students, but also to anyone interested in bioethics.” — John Keown, Georgetown University 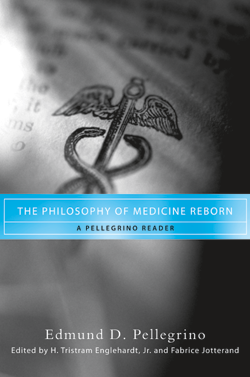 Edmund D. Pellegrino has played a central role in shaping the fields of bioethics and the philosophy of medicine. His writings encompass original explorations of the healing relationship, the need to place humanism in the medical curriculum, the nature of the patient’s good, and the importance of a virtue-based normative ethics for health care.

In this anthology, H. Tristram Engelhardt Jr. and Fabrice Jotterand have created a rich presentation of Pellegrino’s thought and its development. Pellegrino’s work has been dedicated to showing that bioethics must be understood in the context of medical humanities, and that medical humanities, in turn, must be understood in the context of the philosophy of medicine. Arguing that bioethics should not be restricted to topics such as abortion, third-party-assisted reproduction, physician-assisted suicide, or cloning, Pellegrino has instead stressed that such issues are shaped by foundational views regarding the nature of the physician-patient relationship and the goals of medicine, which are the proper focus of the philosophy of medicine.

This volume includes a preface (“Apologia”) by Dr. Pellegrino and a comprehensive Introduction by the editors. Of interest to medical ethicists as well as students, scholars, and physicians, The Philosophy of Medicine Reborn offers fascinating insights into the emergence of a field and the work of one of its pioneers.

Edmund D. Pellegrino has been Professor Emeritus of Medicine and Medical Ethics at the Center for Clinical Bioethics at Georgetown University Medical Center since 2001. The recipient of numerous honors and awards, he has authored or co-authored twenty-four books and is the founding editor of the Journal of Medicine and Philosophy. In 2004, he was named to the International Bioethics Committee of UNESCO, and in 2005 he became the chairman of the President’s Council on Bioethics.

H. Tristram Engelhardt Jr. is a professor of philosophy at Rice University and professor emeritus of medicine at Baylor College of Medicine.

“In this valuable collection of Edmund Pellegrino’s essays, we witness a major, creative, and challenging mind at work in forging a philosophy of medicine. The carefully selected essays show Dr. Pellegrino in action, working to articulate his guiding vision as well as draw out its implications, always at the same time tying his speculations to clinical experience. There simply is no one else who has been doing this at anything like the intellectual level of Dr. Pellegrino’s writings, nor over a similar duration.” — Jorge L. A. Garcia, Boston College

“After a long period of dormancy, philosophy of medicine has blossomed with new life. The single most important physician-philosopher in that rebirth has been Edmund Pellegrino. His contributions to virtue theory, the concept of beneficence, the dispute over the internal and external sources of a morality for medicine, and the role of the Hippocratic tradition are all critical. The essays collected in this volume have changed the history of the philosophy of medicine. He shows that philosophy of medicine can be done with both passion and compassion.” — Robert M. Veatch, Kennedy Institute of Ethics, Georgetown University 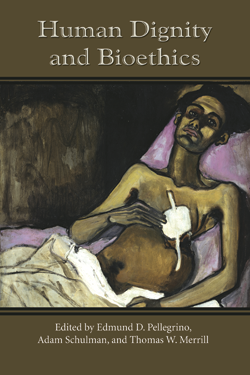 This collection of essays, commissioned by the President’s Council on Bioethics, explores a fundamental concept crucial to today’s discourse in law and ethics in general and in bioethics in particular. Since its formation in 2001, the council has frequently used the term “human dignity” in its discussions and reports. In this volume, scholars from the fields of philosophy, medicine and medical ethics, law, political science, and public policy address the issue of what the concept of “human dignity” entails and its proper role in bioethical controversies. Human Dignity and Bioethics is an attempt to clarify a controversial concept, one that is a critical component in the decisions of policymakers.

Edmund D. Pellegrino, M.D., is professor emeritus of medicine and medical ethics and adjunct professor of philosophy at Georgetown University.

Adam Schulman is a tutor at St. John’s College, Annapolis, and senior research consultant for the President’s Council on Bioethics.

Thomas W. Merrill is a research analyst for the President’s Council on Bioethics.

“These essays make it clear that there is no universal agreement on the meaning of the term, human dignity. Some argue that human dignity has lost its traditional meaning. Others, by contrast, hold firmly to the view that dignity is an essential identifying and irreducible element of human nature. Still others take a more biological than philosophical or theological viewpoint on the question of the meaning of human dignity. An appreciation of the variety of these views is critical, if we are to understand the divergences in how we think and act in response to the challenges posed by contemporary bioethics.” — Edmund D. Pellegrino, M.D.