The Center for Ethics and Culture Solzhenitsyn Series

This series showcases the contributions and continuing inspiration of Aleksandr Solzhenitsyn (1918–2008), the Nobel Prize–winning novelist and historian. The series makes available works of Solzhenitsyn, including previously untranslated works, and aims to provide the leading platform for exploring the many facets of his enduring legacy. In his novels, essays, memoirs, and speeches, Solzhenitsyn revealed the devastating core of totalitarianism and warned against political, economic, and cultural dangers to the human spirit. In addition to publishing his work, this new series features thoughtful writers and commentators who draw inspiration from Solzhenitsyn’s abiding care for Christianity and the West, and for the best of the Russian tradition. Through contributions in politics, literature, philosophy, and the arts, these writers follow Solzhenitsyn’s trail in a world filled with new pitfalls and new possibilities for human freedom and human dignity.

Open Series: If you are an author with a proposal that seems to fit this series, please contact the Center's Scholarly Research & Publications Program Manager Margaret Cabaniss. 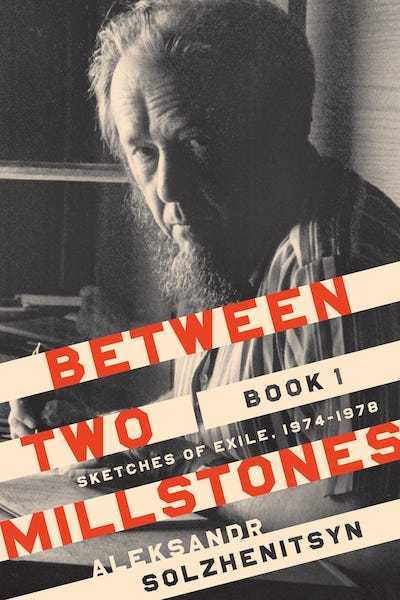 Between Two Millstones, Book 1: Sketches of Exile, 1974–1978
by Aleksandr Solzhenitsyn

Russian Nobel prize–winner Aleksandr Solzhenitsyn (1918–2008) is widely acknowledged as one of the most important figures—and perhaps the most important writer—of the last century. To celebrate the centenary of his birth, the first English translation of his memoir of the West, Between Two Millstones, Book 1, is being published. Fast-paced, absorbing, and as compelling as the earlier installments of his memoir The Oak and the Calf (1975), Between Two Millstones begins on February 12, 1974, when Solzhenitsyn found himself forcibly expelled to Frankfurt, West Germany, as a result of the publication in the West of The Gulag Archipelago. Solzhenitsyn moved to Zurich, Switzerland, for a time and was considered the most famous man in the world, hounded by journalists and reporters. During this period, he found himself untethered and unable to work while he tried to acclimate to his new surroundings.

Between Two Millstones contains vivid descriptions of Solzhenitsyn's journeys to various European countries and North American locales, where he and his wife Natalia (“Alya”) searched for a location to settle their young family. There are fascinating descriptions of one-on-one meetings with prominent individuals, detailed accounts of public speeches such as the 1978 Harvard University commencement, comments on his television appearances, accounts of his struggles with unscrupulous publishers and agents who mishandled the Western editions of his books, and the KGB disinformation efforts to besmirch his name. There are also passages on Solzhenitsyn's family and their property in Cavendish, Vermont, whose forested hillsides and harsh winters evoked his Russian homeland, and where he could finally work undisturbed on his ten-volume history of the Russian Revolution, The Red Wheel. Stories include the efforts made to assure a proper education for the writer's three sons, their desire to return one day to their home in Russia, and descriptions of his extraordinary wife, editor, literary advisor, and director of the Russian Social Fund, Alya, who successfully arranged, at great peril to herself and to her family, to smuggle Solzhenitsyn's invaluable archive out of the Soviet Union.

Between Two Millstones is a literary event of the first magnitude. The book dramatically reflects the pain of Solzhenitsyn's separation from his Russian homeland and the chasm of miscomprehension between him and Western society. 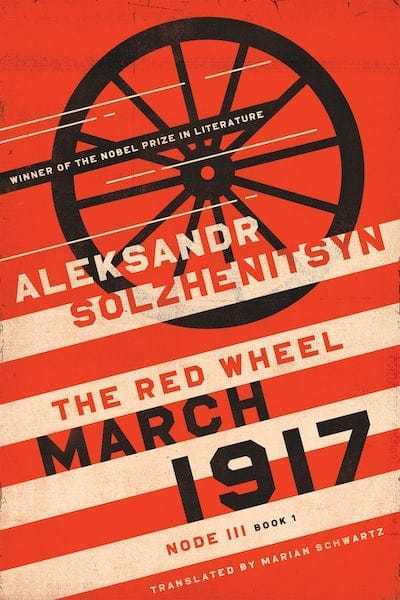 To commemorate the 100th anniversary of the Russian Revolution, the University of Notre Dame Press is proud to publish Nobel Prize–winner Aleksandr Solzhenitsyn’s epic work March 1917, Node III, Book 1, of The Red Wheel.

The Red Wheel is Solzhenitsyn’s magnum opus about the Russian Revolution. Solzhenitsyn tells this story in the form of a meticulously researched historical novel, supplemented by newspaper headlines of the day, fragments of street action, cinematic screenplay, and historical overview. The first two nodes—August 1914 and November 1916—focus on Russia’s crises and recovery, on revolutionary terrorism and its suppression, on the missed opportunity of Pyotr Stolypin’s reforms, and how the surge of patriotism in August 1914 soured as Russia bled in World War I.

March 1917—the third node—tells the story of the Russian Revolution itself, during which not only does the Imperial government melt in the face of the mob, but the leaders of the opposition prove utterly incapable of controlling the course of events. The action of book 1 (of four) of March 1917 is set during March 8–12. The absorbing narrative tells the stories of more than fifty characters during the days when the Russian Empire begins to crumble. Bread riots in the capital, Petrograd, go unchecked at first, and the police are beaten and killed by mobs. Efforts to put down the violence using the army trigger a mutiny in the numerous reserve regiments housed in the city, who kill their officers and rampage. The anti-Tsarist bourgeois opposition, horrified by the violence, scrambles to declare that it is provisionally taking power, while socialists immediately create a Soviet alternative to undermine it. Meanwhile, Emperor Nikolai II is away at military headquarters and his wife Aleksandra is isolated outside Petrograd, caring for their sick children. Suddenly, the viability of the Russian state itself is called into question.

The Red Wheel has been compared to Tolstoy’s War and Peace, for each work aims to narrate the story of an era in a way that elevates its universal significance. In much the same way as Homer’s Iliad became the representative account of the Greek world and therefore the basis for Greek civilization, these historical epics perform a parallel role for our modern world.