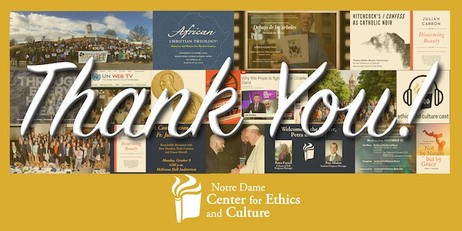 As 2017 draws to a close, the director and staff of the Center for Ethics and Culture would like to extend a sincere "Thank you!" to the many benefactors and friends who have helped us further our mission to promote the Catholic intellectual and moral tradition both on the Notre Dame campus and in the wider public square.

We'd like to highlight several of the student formation opportunities, academic research and conferences, and pro-life workshops and events that the Center has hosted in 2017 thanks to your generous ongoing support.

The CEC partnered with the Notre Dame Right to Life student club to host a contingent of more than 700 students, faculty, staff, and alumni who joined in the March for Life in Washington, D.C. Notre Dame annually brings one of the largest groups to the March to witness joyfully to the dignity of all human persons, born and unborn. Following the March, the CEC partnered with the Notre Dame Alumni Association to host a reception for more than 400 alumni and friends of the university at the National Press Club. Information about the 2018 March for Life and reception available here.

Hope Steffensen was announced as the CEC's second Polking Fellow, topping her up to a full tuition fellowship for three years of study at Notre Dame Law School. The fellowship is awarded to a top candidate who has a demonstrated passion for the Catholic mission of the Law School and who shares Notre Dame's commitment to the inalienable dignity of every human life from conception to natural death. It is made possible through a generous endowment from Paul and Joan Polking.

The CEC sponsored a major five-day conference on African Christian theology at the Notre Dame Rome Global Gateway, gathering more than 50 speakers (including four cardinals) and 150 participants from around the world to discuss issues of systematic theology, evangelization, scripture, moral theology, interfaith dialogue, catechesis, and pastoral theology in the context of the African continent. The influential Catholic news outlet Crux published 30 stories from the conference, concluding that, "What we saw Wednesday through Saturday was the emergence of what one might call 'African Catholicism 2.0.'"

The CEC awarded fellowships to graduate students Sr. Kim Tran, O.P. (Theology) and Melody Wood (Constitutional Studies) to begin their Ph.D. programs in the Fall semester as Graduate Mission Fellows of the CEC. 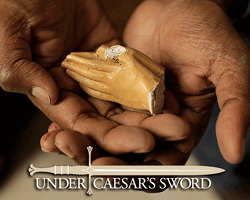 The CEC cosponsored the symposium "What Is To Be Done? Responding to the Global Persecution of Christians" at the National Press Club, at which the final report of the Under Caesar's Sword research project, "In Response to Persecution," was presented. Featured speakers included Cardinal Donald Wuerl (Archbishop of Washington, D.C.) and Farahnaz Ispahani (Woodrow Wilson International Center for Scholars). 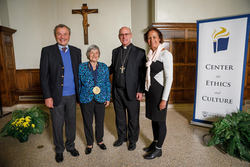 The CEC hosted more than 400 guests at a Mass and banquet to present the Notre Dame Evangelium Vitae Medal to the Jérôme Lejeune Foundation for their decades of research, care, and advocacy on behalf of persons with genetic intellectual disabilities in the tradition of their namesake, Servant of God Dr. Jérôme Lejeune. Pope Francis sent a message of congratulations and blessing for the occasion.

May
The CEC rejoiced with the 23 undergraduates, 11 graduates, and 7 law students who graduated from our Sorin Fellows program and walked at commencement. As part of the weekend's festivities, the CEC hosted Cardinal Kevin Farrell, the Vatican's Prefect for the Dicastery of Laity, Family, and Life, for a breakfast and informal chat with undergraduate Sorin Fellows and their families.

The CEC co-hosted a colloquium "On Secularization" at the Sorbonne in Paris in collaboration with the Université Paris Descartes-Sorbonne Paris Cité, the Università Cattolica del Sacro Cuore (Italy), and the Centre d'études du Saulchoir (France). The colloquium inaugurated a partnership among the institutions that will include future conferences, publications, and faculty exchange.

More than 40 Sorin Fellows headed off to summer internships sponsored by the CEC, including opportunities with the Pontifical Academy for Life; the LA Archdiocese Office of Life, Justice, and Peace; the Becket Fund for Religious Liberty; the Joel Nafuma Refugee Center in Rome; the Pro-Life Campaign of Ireland; the Charlotte Lozier Institute; and the Stark Lab for Neuroscience at UC Irvine.

The CEC cosponsored an immersion seminar on Economics and Catholic Social Teaching for graduate students and junior faculty in economics and finance, hosted at Notre Dame's Rome Global Gateway. The annual seminar is organized by a team including professors Martijn Cremers and Joseph Kaboski of the CEC's Faculty Advisory Committee.

June
CEC Director Carter Snead was a featured panelist at a convocation on Catholic Social Thought attended by Cardinal Peter Turkson of the Vatican's Dicastery for Integral Human Development. The convocation sought to establish a closer collaboration among the Vatican and premier Catholic educational institutions in order to "deepen the social doctrine of the Church and attempt to make it widely known and applied."

The CEC welcomed 46 pro-life advocates from around the world to the Notre Dame Vita Institute to equip them with the skills and knowledge to be more effective in their work as advocates, litigators, health care providers, community organizers, and counselors. 65% of this year's cohort were women in leadership and direct service roles, and participants represented ten countries spread across six continents. The ND Vita Institute now has more than 250 alumni actively building a culture of life worldwide. Information about the one-day Vita Institute: NYC workshop being offered on January 6, 2018 available here.

The CEC co-sponsored the 7th Annual Summer Philosophy Workshop in partnership with the Thomistic Institute and Mount Saint Mary's College in Newburgh, NY, with the theme "Aquinas on Metaphysics." 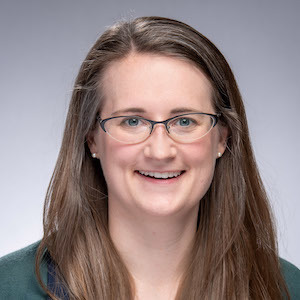 Laura (Nash) Gonsiorek was promoted to the newly created position of Associate Director for Operations, to oversee the Center's day-to-day operations and finances, execute strategic planning, oversee the staff, and ensure Center initiatives operate at the highest level. Prior to becoming Associate Director, Laura was the CEC's Event Planning Program Manager. She is currently pursuing an EMBA at the Mendoza College of Business.

The Sorin Fellows student formation program kicked off the Fall Semester with more than 200 undergraduate and graduate students. Since its foundation in 2013 with 7 students, the program has blossomed, giving students the opportunity to deepen their understanding of the Catholic moral and intellectual tradition and examine the many ways they can be brought to bear on pressing ethical issues in culture and public policy today.

The CEC launched a new podcast series, "Ethics and Culture Cast," featuring lively conversations with professors, fellows, and friends of the Center. Episodes are released every other Thursday during the academic year. The first six episodes of the podcast have already been downloaded more than 1900 times since the early September launch.

On Respect Life Sunday, the CEC announced that the 2018 Notre Dame Evangelium Vitae Medal will be awarded to Mary Ann Glendon, professor of law at Harvard Law School and former US Ambassador to the Holy See. "Through her work as a world-class scholar and teacher, a diplomat, a White House bioethics adviser and an official of the Holy See, she has provided a joyful, loving and unwavering witness to the dignity of all persons, born and unborn, as created in the image and likeness of God. She sets the standard for all of us who work to build a culture of life worldwide," said CEC Director Carter Snead.

The CEC welcomed two new program managers to the staff at the beginning of October. Petra Farrell is managing the Culture of Life programming, while Pete Hlabse oversees the Student Formation programs, including the Sorin Fellows.

The CEC hosted a roundtable discussion with Fr. Julián Carrón, president of the lay ecclesial movement Communion & Liberation, about his book Disarming Beauty, the second volume in the CEC's book series with University of Notre Dame Press "Catholic Ideas For a Secular World." Also participating in the roundtable were Ross Douthat (New York Times) and Notre Dame professors Ernest Morrell and Paolo Carozza. 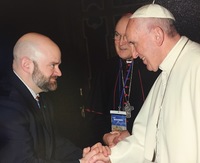 CEC Director Carter Snead was reappointed to the Pontifical Academy for Life, the pope’s principal advisory group on life issues and bioethics. He spoke at the 2017 plenary meeting of the academy about the formation of families through adoption, and contributed a reflection to the art exhibit at the Vatican Museum inaugurated as part of the academy's annual meeting. 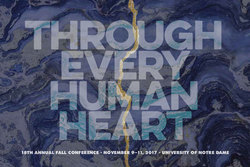 More than 800 scholars and guests gathered for the CEC's 18th annual interdisciplinary Fall Conference, “Through Every Human Heart,” considering the perennial problem of good and evil. 112 presentations were chosen from a record number of paper proposals, covering topics as broad as criminal law, education and moral formation, theology, the common good, political science, medical ethics, the death penalty, religious freedom, and the arts.

Thank you to each and every one of our benefactors and friends for your generous ongoing support!

May your Advent and Christmas seasons be filled with blessings and joy!