From May 31–June 2, Carter Snead, director of the Notre Dame Center for Ethics and Culture, participated in an exclusive meeting of the directors of the leading US university centers and institutes whose work focuses on Catholic Social Thought. The convocation was hosted at Georgetown University and featured invited representatives from 30 of the leading Catholic institutions of higher learning in the United States, with the goal of establishing a closer collaboration among the Vatican and premier Catholic educational institutions in order to "deepen the social doctrine of the Church and attempt to make it widely known and applied."

The three-day convocation featured both public and private dialogues with Cardinal Peter Turkson, prefect of the Vatican's dicastery for Integral Human Development, on topics such as peacebuilding, care for creation, economic injustice, human migration, and the plight of refugees. Other key participants in the dialogues included Archbishop Silvano Tomasi of the Pontifical Council for Justice and Peace and Jonathan Reyes, executive director of the US Conference of Catholic Bishops' Department of Justice, Peace, and Human Development. The event was sponsored and moderated by Georgetown's Initiative on Catholic Thought and Public LIfe, directed by John Carr, Reyes' predecessor at the USCCB and speaker at the CEC's 2014 Fall Conference.

Professor Snead was a featured panelist at the event, and delivered remarks about the student formation, academic research, and public policy work of the Center. "I am grateful that the CEC was invited to participate in this important conversation," Snead said. "It was inspiring to learn about the great work being done by our peers at other universities, and to begin to explore avenues of collaboration." Snead concluded, "the Center for Ethics and Culture enthusiastically accepts Cardinal Turkson's invitation to assist him as he commences the vital work of the new dicastery." 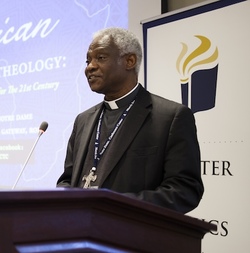 Cardinal Turkson is no stranger to the work of the Center for Ethics and Culture, as he gave a key presentation at the "African Christian Theology: Memories and Mission for the 21st Century" conference that the Center sponsored at Notre Dame's Rome Global Gateway in March 2017.