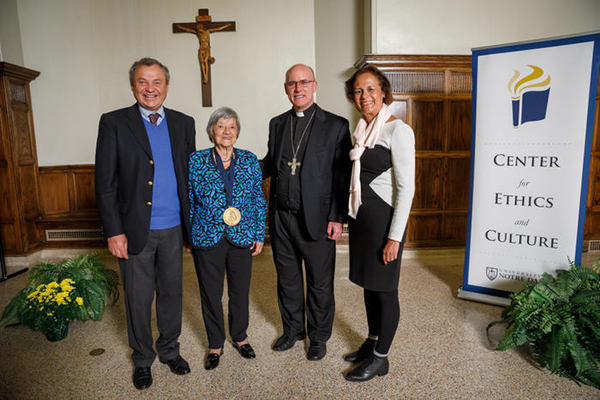 The Notre Dame Center for Ethics and Culture awarded the 2017 Notre Dame Evangelium Vitae Medal to the Jérôme Lejeune Foundation at a Mass and banquet on April 29, 2017, attended by more than 400 guests, including persons with Down syndrome and other genetic disorders and their families.

“Professor Lejeune’s great genius was the piercing quality of his vision, which saw in the weakest members of society nothing less than the reflection of the Creator,” said O. Carter Snead, William P. and Hazel B. White Director of the Notre Dame Center for Ethics and Culture. “For persons with Down syndrome and other genetic disabilities, this vision was, quite simply, transformative. Where once they were shunned, hidden away, and disinherited by a society that did not understand them, Lejeune’s discovery in 1958 of an extra chromosome on the twenty-first pair enabled this humble French doctor to bring his patients—his ‘little ones,’ as he called them—into the light.”

Snead concluded, “The Jérôme Lejeune Foundation continues to speak out on behalf of society’s disinherited via public advocacy that helps the world to see with the eyes of Professor Lejeune, to love with his radical hospitality, to appreciate the beauty in our differences—and above all, to recognize in each unique individual the reflection of the Creator, which unites us all with equal dignity.” 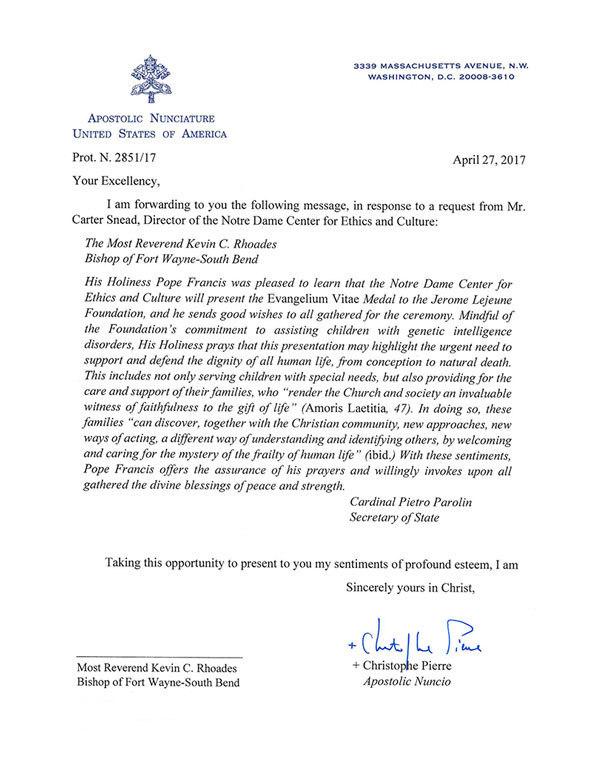 In a message of greeting from Pope Francis sent for the occasion, the Cardinal Secretary of State wrote, "Mindful of the Foundation's commitment to assisting children with genetic intelligence disorders, His Holiness prays that this presentation may highlight the urgent need to support and defend the dignity of all human life, from conception to natural death. This includes not only serving children with special needs, but also providing for the care and support of their families, who 'render the Church and society an invaluable witness of faithfulness to the gift of life' (Amoris Laetitia 47)."

Professor Jérôme Lejeune was born in 1926 in Montrouge, France. In 1958, while studying chromosomes of patients with Down syndrome, he discovered an unexpected third chromosome on the 21st pair, a genetic abnormality he named trisomy 21. This discovery was the first to link an intellectual disability to a genetic cause. Professor Lejeune also conducted pioneering research into trisomy 18 and trisomies on the 8th and 9th chromosomal pairs.

Having discovered the genetic causes of these intellectual disabilities, Lejeune threw himself into caring for his patients, searching for treatments, and speaking out on their behalf. Professor Lejeune devoted his life to protecting unborn children with Down syndrome from so-called “therapeutic abortion,” which he regarded, as Pope St. John Paul II later wrote, as waging “a war of the powerful against the weak” (Evangelium Vitae 12). “Medicine becomes mad science when it attacks the patient instead of fighting the disease,” Professor Lejeune said. “We must always be on the patient’s side, always.”

In 1962, Professor Lejeune was honored by President John F. Kennedy with the first Kennedy Prize for his research into intellectual disabilities. In 1969, he received the William Allen Award from the American Society of Human Genetics, the highest award possible for a geneticist. Widely considered the “father of modern genetics,” Professor Lejeune was appointed by Pope John Paul II as the first president of the Pontifical Academy for Life, which advises the pope on issues surrounding the promotion and defense of human life, especially in bioethics. Professor Lejeune died on Easter Sunday, 1994. He was recognized as a “Servant of God” by the Vatican’s Congregation for the Causes of Saints in 2012.

The Jérôme Lejeune Foundation was established in 1996 to carry on the professor’s commitment to research, care, and advocacy on behalf of persons with genetic intellectual disabilities. As Snead said, “In a society where 90 percent of children diagnosed in the womb with Down syndrome are aborted—where even to show in the media a child with Down syndrome appearing happy and content can be labeled ‘inappropriate’—the Jérôme Lejeune Foundation continues to defend the ‘sublime dignity’ of all God’s children, born and unborn.” In addition to funding ethically-conducted research, the Foundation provides direct health care, education, and advocates for legal protections for persons with disabilities. Led by Chairman Jean-Marie Le Méné and Vice President Birthe Lejeune (Dr. Lejeune’s widow), the Foundation conducts this essential work in its namesake’s spirit of radical generosity, hospitality, and love of the most vulnerable members of the human family.

The evening began with Mass celebrated by Bishop Kevin C. Rhoades of Fort Wayne–South Bend, concelebrated by more than 25 members of the Congregation of Holy Cross, including Fr. Bill Lies, C.S.C., University Vice President for Mission Engagement and Church Affairs. The gifts for consecration were presented by the family of John and Mary O'Callaghan, whose son Tommy was personally blessed by Pope Francis at the Jubilee Mass for the Sick and Disabled in June 2016. Other notable guests at the celebration included Ambassador Mary Ann Glendon, the Learned Hand Professor of Law, Harvard Law School; David DeSanctis, actor and star of the 2014 feature film Where Hope Grows; and Richard Doerflinger, inaugural recipient of the Notre Dame Evangelium Vitae Medal. Video of the Mass may be viewed on the Center's YouTube page.

Upon receiving the medal, the diminutive Madame Lejeune addressed her remarks to the guests with Down syndrome, telling them, "You are my husband's beloved 'little ones.' Thank you for being you!" She concluded her brief comments by praising the pro-life witness of the University of Notre Dame, remarking that, "There is no university like this in France!"

The Notre Dame Evangelium Vitae Medal is the nation’s most important lifetime achievement award for heroes of the pro-life movement, honoring individuals whose efforts have served to proclaim the Gospel of Life by steadfastly affirming and defending the sanctity of human life from its earliest stages. Previous recipients include Richard Doerflinger, associate director of the USCCB’s Secretariat for Pro-Life Activities; Helen M. Alvaré, associate professor of law at George Mason University; Mother Agnes Mary Donovan and the Sisters of Life; Congressman Chris Smith, co-chair of the Bipartisan Congressional Pro-Life Caucus, and his wife, Marie Smith, director of the Parliamentary Network for Critical Issues; Supreme Knight Carl Anderson and the Knights of Columbus, and Mother Loraine Marie Maguire and the Little Sisters of the Poor. Announced annually on Respect Life Sunday, the first Sunday of October, the Notre Dame Evangelium Vitae award consists of a specially commissioned medal and $10,000 prize.

A gallery of photos from the celebration may be viewed on the ND Center for Ethics and Culture's Flickr page.

For more information about the Evangelium Vitae Medal and the work of the Notre Dame Center for Ethics and Culture, contact communications specialist Ken Hallenius at 574-631-3192.