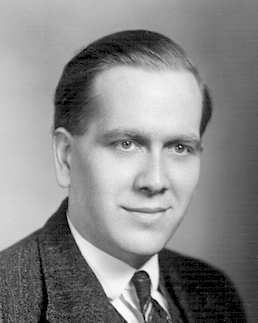 Born in Cherbourg, France, Yves René Marie Simon (1903–1961) was the youngest child of Auguste and Blanche Berthe Simone. His grandfather, Laurent Simon, was an inventor of agricultural machines and began his own manufacturing company to sell his inventions; Yves’s father served as technical director of the company. With the success of the company, Auguste and his wife enjoyed a middle-class lifestyle and were able to provide well for their children.

The family, however, knew misfortune as well. In 1909, Yves’s two older brothers contracted tuberculosis. His eldest brother did not survive the disease; his other brother eventually recovered, but the effects of the disease forced him into a sanitarium for many years. When he was able to leave the sanitarium, Yves’s brother volunteered in the army and was killed in battle during World War I. Yves himself contracted an illness at the age of nine that required him to remain in a cast for several years, a treatment that left him lame for the rest of his life.

In 1920, at the age of seventeen, Simon moved to Paris to begin a program of study at the Lycée Louis le Grand. This program included studies in Latin, Greek, French literature, history, and some philosophy. He enjoyed his studies greatly and found that he was particularly fond of philosophy. Thus, after a year in the program at the Lycée Louis le Grand, Simon enrolled in philosophy programs at the Sorbonne and the Catholic University of Paris simultaneously. Simon earned a License en Lettres from the Sorbonne in 1922 and a Diplome d’Etudes Superieures de Philosophie from the Catholic University in 1923. At the Catholic University of Paris, Simon encountered eminent Thomistic philosopher Jacques Maritain, who was on the university’s faculty at the time. From Maritiain, Simon learned that philosophy is not a “mere cultural exercise” and should be taken seriously as a search for truth and wisdom—a lesson that Simon learned well. Later, Simon and Maritain became great friends and colleagues.

Unsure about what to do after completing his degrees, Simon took a clerical job at the Ministry of Education. After a time, Simon, prompted by his own experience with illness during his childhood, decided to enroll in medical school. He began his studies for a career in medicine in 1926, but by 1928, Simon had decided that philosophy was his calling. That year, he returned to the Catholic University of Paris to complete a doctoral degree in philosophy.

At the Catholic University of Paris, Simon concentrated on Scholastic philosophy, particularly within the Aristotelian-Thomistic tradition. In 1930, while working on his doctoral dissertation on the ontology of knowledge, Simon began teaching at the Catholic University of Lille. In the same year, Simon also married Paule Louise Dromard. He completed his dissertation in 1934 and published it along with a companion volume on moral knowledge.

During his time at the Sorbonne, Simon had been introduced to French social thinkers like Pierre-Joseph Proudhon. While Aristotle, Aquinas, and their commentators were the focus of his doctoral studies, Simon, provoked by the political and social conflicts of the day, gradually turned his attention to political and social thought. His particular interests were the subjects of work, workers, wealth, and culture. His writings on these topics earned him a name among Catholic thinkers. In 1938, upon the recommendation of Waldemar Gurian and Etienne Gilson, Rev. John O’Hara, C.S.C., then president of Notre Dame, invited Simon to Notre Dame to serve as a visiting professor of philosophy.

Unable to return to France with the outbreak of World War II, Simon was offered a permanent position as professor of philosophy at Notre Dame, where he continued his political and social writings. Simon made his voice heard around the world during the war: He was outspoken about the need to destroy fascism and was a staunch advocate of democracy. In fact, in 1945, the day before an Allied invasion, a leaflet was dropped over France praising Simon’s work in “keeping alive the light of the French cause in the United States.” Simon became known as “the philosopher of the fighting French.”

Simon’s work earned him international recognition, and he was in great demand as a speaker and lecturer throughout North America. In 1943, the University of Mexico recognized him by awarding him the honor of Profesor Extraordinario. Church leaders recognized his work within, and contributions to, the Catholic philosophical tradition. He was elected a member of the Pontifical Academy of St. Thomas Aquinas in Rome in 1946.

Simon left the University of Notre Dame in 1948 to join the Committee on Social Thought at the University of Chicago, where he continued his research and his work with students until his death in 1961. A beloved teacher, his students traveled to his bedside at Saint Joseph’s Hospital in South Bend, Indiana, when he fell ill to continue work on their dissertations.

Simon’s political and social thought continues to be influential today. Along with Jacques Maritain and Etienne Gilson, he belongs to the ranks of the great modern contributors to the Aristotelian-Thomistic tradition.

[Heroic faith] realizes the indissoluble, living and impelling unity of the future and the present. It transforms the present as a function of the future because it is the representation of a future which will not be realized, like a utopia, by means of the intervention of an all-powerful force, but which will be realized only at the cost of effort and sacrifice every moment of the day. (“The March to Liberation”)

It is very reasonable to consider that the better future is being forged precisely there where the greatest sufferings are endured and the most generous sacrifices offered in view of a better future, that is to say, in the mute and silent underground where the resistance of oppressed peoples exercises itself every day. It is there that the future of real liberty is being forged.... (“The March to Liberation”)

The daily life of man is composed of things whose meaning is hidden in the mystery of their familiarity. Work is one of these. (“Work, Society, and Culture”)

No economic theory can do without a clear concept of wealth; but no concept of wealth is…intelligible without some reference to use or service, which in turn requires an understanding of human nature and of what is good for man. (“Work, Society, and Culture”)