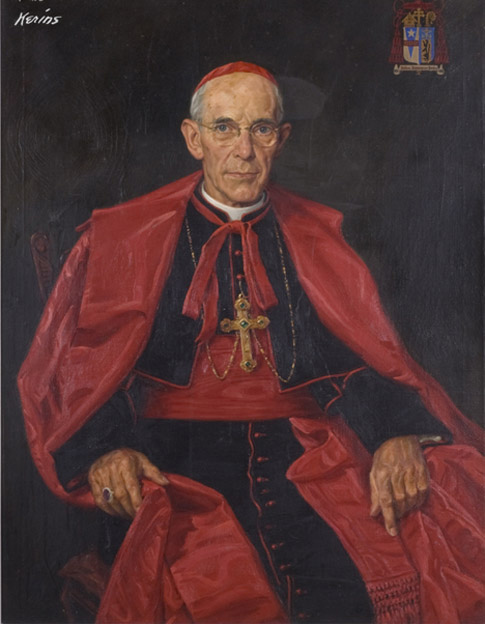 John Francis O’Hara was born in Ann Arbor, Michigan, in 1888. One of eight children who grew up attending Catholic diocesan schools, he spent three years studying in Latin America when his father was appointed American consul at Montevideo, Uruguay. His time in Uruguay provided him with a strong command of the Spanish language and a great understanding of Latin American culture before he returned to the United States at the age of twenty.

In spite of his excellent education, O’Hara had earned no diploma or certificate with which he could apply for further studies. So, at the urging of a friend, O’Hara traveled to South Bend, Indiana, to speak with Rev. John Cavanaugh, C.S.C., president of Notre Dame. Hearing of O’Hara’s skills in Spanish, Father Cavanaugh offered him a position teaching Spanish to high school students at Notre Dame (to defray the costs of tuition and board), and O’Hara began his education at Notre Dame in January 1909. Having had no education in Greek, a prerequisite for pursuing a Bachelor of Arts degree at the time, he pursued a bachelor’s degree in economics and history. He was very active on campus, participating in oratory, debate, and inter-hall track competitions. But perhaps O’Hara’s greatest contribution to Notre Dame as a student was his introduction to the campus of the practice of frequent or daily Communion, a practice he would continue to support during his time as prefect of religion at Notre Dame.

After graduating in 1912, O’Hara entered the novitiate for the Congregation of Holy Cross, and in 1913, he began his theological studies for the priesthood at Holy Cross College in Washington, D.C. Recognizing his outstanding scholarship of Latin America—an interest he pursued at Holy Cross, under the guidance of Rev. John Zahm, C.S.C.—Father Cavanaugh had it in mind to bring O’Hara back to Notre Dame to develop a course in Latin American studies. Because of his talent and maturity, O’Hara was ordained early, in 1916; after his ordination, Father O’Hara completed his final year of theological studies and developed the courses in Latin American studies he would begin teaching at Notre Dame in 1917.

Once a faculty member at Notre Dame, Father O’Hara was appointed prefect of religion, a position where he extended his personal care to every boy who crossed his path at Notre Dame. Under Father O’Hara’s leadership, the practice of daily Communion flourished on campus—even among the football players. When the football team had to travel on a First Friday to an away game at West Point in 1921, Father O’Hara arranged for the players to make a stop to receive communion—an unusual event that made national headlines, and a tradition that continues on the Notre Dame team to this day.

Father O’Hara served as prefect of religion until 1933, when he was elected vice president of Notre Dame; in 1934, he was elected to the office of president. Notre Dame grew and flourished under Father O’Hara’s leadership, adding a number of new buildings and programs, including the first graduate programs at Notre Dame. His tenure as president came to an end when he was appointed bishop of the military and titular bishop of Mylasa in 1939. As a military chaplain during World War II, Bishop O’Hara made numerous trips to military bases throughout the United States, serving the spiritual needs of troops with the same care he showed to the men of Notre Dame.

With the end of World War II, Bishop O’Hara was appointed bishop of Buffalo, New York, in 1945; in 1951, he was appointed archbishop of Philadelphia and elevated to cardinal in 1958. Cardinal O’Hara left behind him a legacy of Catholic education, establishing in each diocese where he served a strong system of Catholic elementary and high schools, and remaining outspoken about the need for schools to serve America’s young Catholics and to spur the development of Catholic life in America.

One of the greatest tragedies which could befall a people would be to have her sons offer their lives for a cause which they believed to be right, and at the same time to neglect their spiritual welfare in the army of Christ.

Following [Our Lady] you will not go astray.

Timeline of the career of John Cardinal O’Hara