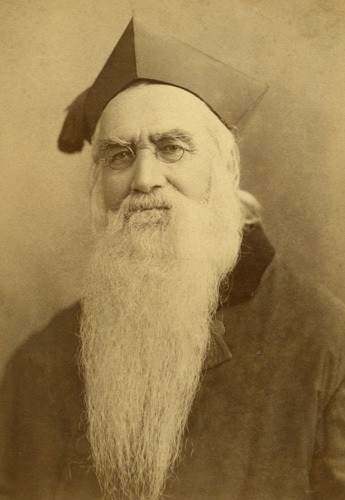 Rev. Edward Sorin, C.S.C. (1814–1893), the founder of the University of Notre Dame, was called upon by the superior of the Congregation of Holy Cross, Blessed Rev. Basil Moreau, to lead a group of priests in the mission territory of Indiana. In the winter of 1842, Father Sorin and his brothers first set foot upon the ground that would become the University of Notre Dame du Lac (Our Lady of the Lake).

“Sometimes when I think of the good that can be done throughout the country, had we a College conducted according to Catholic principles,” Father Sorin wrote, “my desire to erect such a building torments me and disturbs my rest.” But the mission experienced immediate hardships, among them harsh winters and a series of fires that burned their work to the ground. Lacking the funds to continue building, Father Sorin and his companions educated the children of the Catholic families in the area in exchange for help in the construction of their school.

The first residents to receive an education at Notre Dame were, in fact, orphans: The Brothers of Saint Joseph established the orphanage at Notre Dame to educate children beyond the ages of twelve and thirteen. In the early days, Notre Dame itself was known primarily as a vocational school, where training and apprenticeship were offered to the manual laborers of the area. From these humble beginnings, Father Sorin would see to it that Notre Dame became “one of the most powerful means of doing good in this country.”

Through their many hardships, Father Sorin and his companions never lost sight of their hope: “Yes, we are happy,” he wrote. “We have the Lord with us. Only tonight we hung our sanctuary lamp where none had hung before....They tell us we won’t be able to afford to keep it burning. But we have a little olive oil and it will burn while it lasts.... We can see it through the woods and it lights the humble home where our Master dwells. We tell each other that we are not alone, that Jesus Christ lives among us. It gives us courage.”

The light that hung in the sanctuary of a small log chapel at Notre Dame du Lac illuminated the hearts and minds of Father Sorin and his brother priests, inspiring their work and sustaining them in times of hardship. They dedicated the educational institution they would soon begin to the Blessed Virgin Mary: “With my Brothers and myself I presented to the Blessed Virgin all those generous souls whom Heaven should be pleased to call around me, or should come after me. From that moment I remember not a single instance of a serious doubt in my mind as to the final result of our exertions.”

“The Main Building.” A brochure by the Office of Public Relations and Information. University of Notre Dame.