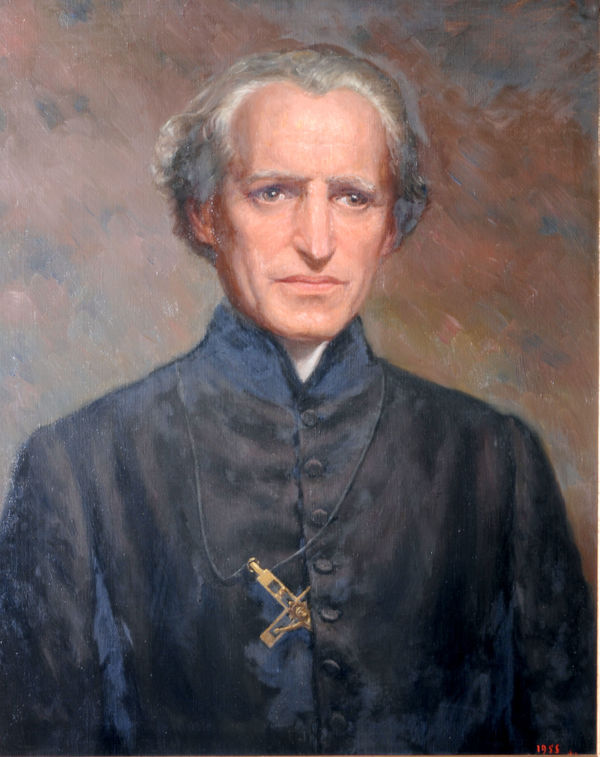 Blessed Rev. Basil Moreau (1799–1873) is the founder of the Congregation of Holy Cross, the order of priests that would go on to found the University of Notre Dame. As a priest who came of age in the wake of the attacks on the Church during the French revolution, Father Moreau saw firsthand the pressing need to rebuild the Church in France. Many new religious orders and schools were founded in France during this time, among them the Auxiliary Priests of Le Mans—a group of priests organized by Father Moreau who ministered to the poor and needy in Le Mans. Others joined in Father Moreau’s work, including Rev. Jacque Dujarié, the founder of the Brothers of Saint Joseph. Together, the priests and brothers opened schools in the countryside where young Catholics might be instructed in the faith. Eventually, Father Moreau took over the direction of the Brothers of Saint Joseph and united them with his own Auxiliary Priests, forming the Congregation of Holy Cross in 1840.

Meanwhile, the Catholic population of the Northwest Territory of the United States was growing rapidly, due to immigration from the eastern states. The first bishop of Vincennes, Most Rev. Simon Bruté, saw the need for priests to minister to the growing Catholic population in the area, particularly through the foundation of Catholic schools. Recognizing the outstanding missionary service of the Congregation of Holy Cross to France’s rural Catholics and to the poor, and knowing of the success of the Brothers of Saint Joseph in establishing Catholic schools in rural France, Bishop Bruté saw Father Moreau as one uniquely suited to provide for the needs of Catholics in the Northwest Territory. In the summer of 1839, Bishop Bruté pleaded with Father Moreau to send priests and brothers to the missions in Indiana, that they might sustain and spread the Faith there, and Father Moreau accepted the challenge.

In the summer of 1841, Father Moreau sent six brothers to Indiana. They would set sail in the fall, accompanied by a priest who would serve as their director and superior—an energetic and dynamic 27-year-old who was among the first to join the Congregation: Rev. Edward Sorin, the eventual founder of the University of Notre Dame.