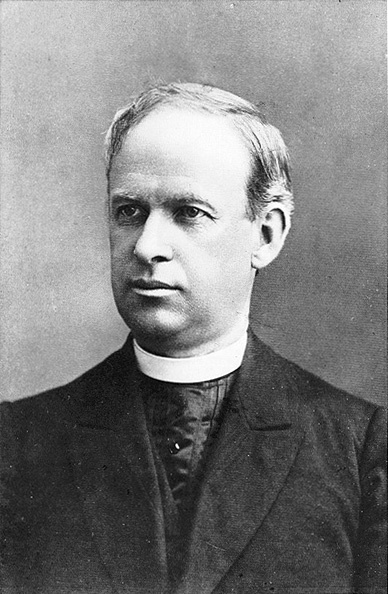 Rev. John A. Zahm, C.S.C. (1851–1922), was one of Notre Dame’s earliest graduates—and one of her most renowned scholars and professors. After being accepted to the college in 1867, Zahm initially struggled with his studies (one time failing both mathematics and German) before graduating with honors in 1871 and joining the seminary.

When the college suffered from a shortage of instructors that same year, he was asked to assist in teaching classes in the science department. He quickly became a jack of all trades on campus: In 1872, he was listed in Notre Dame’s Twenty-Ninth Annual Catalogue as being assistant librarian; curator of the museum; and assistant in chemistry, physics, and natural science, all while completing his Master of Arts at the college. The following year, he was named professor of chemistry and physics and became co-director of the science department, director of the college library, and a member of the board of trustees. He was ordained on June 4, 1875, and, at the age of twenty-five, was appointed vice-president of the university, a post he would hold for nine years.

In the years immediately following his ordination, Father Zahm began an educational crusade to transform Notre Dame into a recognized institution of Catholic higher education, especially in the sciences. He recognized the growing influence of modern science on the world—a force leading to atheism, agnosticism, and skepticism among scholars and students. Father Zahm wanted to show academia, and the world at large, “that there is nothing in evolution, properly understood, which is contrary to Church Doctrine.” He would spend his energy defending the Church’s understanding of the relationship between faith and reason, arguing that her intellectual and moral tradition was the greatest source of progress in the world.

“The Church needs not apologists,” Father Zahm wrote. “Her past history is her apology. Her raison d’être is seen in the miraculous transformation she has affected in the moral, social, and intellectual condition of mankind since her advent into this world. All the civilization and enlightenment we now enjoy; all that is great and good and noble in the world; all that is pure, grand and sublime in humanity, is owing to her…. Without her, progress and civilization…would have been impossible.”

Closer to home, Father Zahm recognized that Notre Dame still suffered from a shortage of qualified teachers. Brothers and seminarians, like Father Zahm himself, were appointed to fill the ranks of the faculty before they had finished their own studies. Worried about the quality of the education seminarians and religious were receiving, as well as the subsequent effects their teaching had on students at Notre Dame, Father Zahm secured permission from Superior General Rev. Gilbert Français to begin a House of Studies to improve the quality of education at Notre Dame among the ranks of the religious faculty and the university’s students. He was appointed prefect of studies at Holy Cross College, established adjacent to Catholic University in Washington, D.C., in 1895, where he developed the curriculum for the House of Studies and the whole Congregation.

In addition to his scholarly works in the sciences, Father Zahm was an accomplished historian and naturalist. He traveled all over the world, especially to South America, documenting history and culture. Sharing his interest in natural history, Father Zahm became a good friend and travel companion of Theodore Roosevelt. He was also a scholar of Dante and gave Notre Dame one of the leading library collections on Dante in the United States, known as the Zahm Dante Collection. Under his leadership, Notre Dame became the first college campus in the United States to be lit by electricity.

Father Zahm remains one of the most distinguished scholars and leaders Notre Dame has ever produced. From his work trying to reconcile faith and reason in the face of modern skepticism, to his scholarship on Dante and his studies in natural history, to his zeal for Catholic education, Father Zahm’s legacy lives on at Notre Dame, contributing to the school’s tradition of excellence as a Catholic institution of higher learning.

No, the man of science is not intellectually hampered because he happens to be a man of faith and of strong religious persuasions. His acceptance of the Bible does not handicap him in research nor preclude him from enjoying the completest mental liberty of which moral man is capable. His faith shields him from danger as the beacon-light protects the mariner from harm, but it in no wise restricts his freedom of thought and action. By hearkening to the gentle voice of religion he escapes the errors of Atheism, Pantheism, Materialism, and Monism, which are at present so rampant, and which have more than anything else obstructed research and retarded the progress of true science.

One may indeed reject the truths of the Bible and discard the teachings of faith, as the mariner may ignore the saving bell or the friendly pharos, but he does so at his peril. Far from gaining anything by this mad assertion of independence—an independence which means not liberty and life, but rashness and destruction—he inevitability loses, and his loss carries with it the loss and death, it may be, of others besides. There is too much fog and darkness enveloping many of the problems of philosophy for us to close our eyes to the sun of Truth or for us to make naught of the light of God’s inspired word. (Father Zahm in “Bible, Science, and Faith”)

History of the Zahm Dante Collection and Biography of Father Zahm