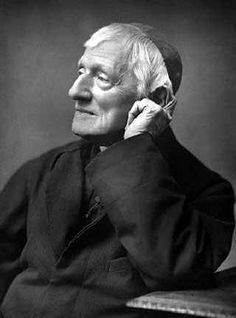 John Henry Newman (1801–1890) was an Anglican divine and one of the leaders of the Oxford Movement, which sought to portray the Church of England as the preserver of original Christian doctrine and to chart a via media between Catholicism and Protestantism. Newman’s efforts culminated in what is perhaps his most famous work, An Essay on the Development of Christian Doctrine. The conclusions to which he found himself driven were not, however, what he had hoped: After a long struggle, Newman converted to Catholicism in 1845.

His conversion had an enormous impact on both sides of the Atlantic, and many followed in his wake. Augustine Hewit, an Episcopal priest of Baltimore, reported his reaction on hearing the news from his bishop: “I passed him on the steps and went out, and heard him say in a sorrowful tone, ‘Newman has gone.’ It went to my heart as if I had heard of my father’s death.” But a year later, Hewit went too. Cardinal Newman was a gifted writer of enormous erudition and literary output.

The world passes. It is but a pageant and a scene. The lofty palace crumbles. The busy city is mute. The ships of Tharsis have sped away. On heart and flesh, death is coming. The veil is breaking. Departing soul, how have you used your talents, your opportunities, the light poured ’round you, the warnings given you, the grace inspired in you? (“Discourses to Mixed Congregations, Discourse 6”)

If virtue be a mastery over the mind, if its end be action, if its perfection be inward order, harmony, and peace, we must seek it in graver and holier places than in Libraries and Reading-rooms. (“The Tamworth Reading Room”)

In morals, as in physics, the stream cannot rise higher than its source. Christianity raises men from earth, for it comes from heaven; but human morality creeps, struts, or frets upon the earth's level, without wings to rise. (“The Tamworth Reading Room”)

That the increase and expansion of the Christian Creed and Ritual, and the variations which have attended the process in the case of individual writers and Churches, are the necessary attendants on any philosophy or polity which takes possession of the intellect and heart, and has had any wide or extended dominion; that, from the nature of the human mind, time is necessary for the full comprehension and perfection of great ideas; and that the highest and most wonderful truths, though communicated to the world once for all by inspired teachers, could not be comprehended all at once by the recipients, but, as being received and transmitted by minds not inspired and through media which were human, have required only the longer time and deeper thought for their full elucidation. This may be called the Theory of Development of Doctrine. (“An Essay on the Development of Christian Doctrine”)

My stronghold was Antiquity; now here, in the middle of the fifth century, I found, as it seemed to me, Christendom of the sixteenth and nineteenth centuries reflected. I saw my face in that mirror, and I was a Monophysite. The Church of the Via Media was in the position of the Oriental communion, Rome was, where she now is; and the Protestants were the Eutychians. Of all the passages of history, since history has been, who would have thought of going to the sayings and doings of old Eutyches, that delirus senex, as (I think) Petavius calls him, and to the enormities of the unprinicipled Dioscorus, in order to be converted to Rome! (“Apologia Pro Vita Sua”)

An Essay on the Development of Christian Doctrine, by John Henry Newman

An Essay in Aid of a Grammar of Assent, by John Henry Newman

The Idea of a University (fragments), by John Henry Newman

Letters and Correspondence of Newman to 1845, edited by Anne Mozley