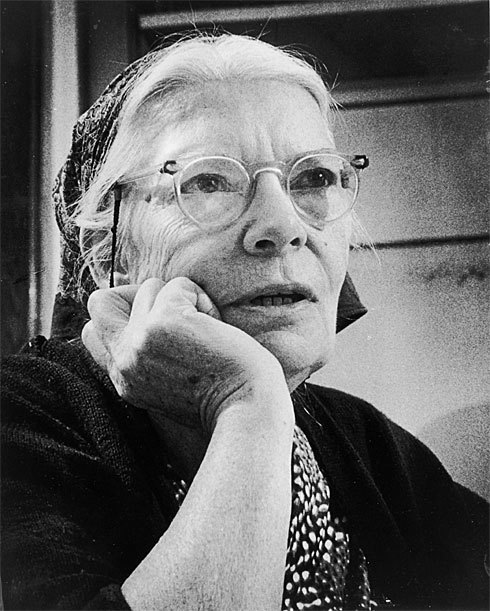 After spending her youth as a radical and a bohemian, Dorothy Day (1897–1980) converted to Catholicism in 1927. Devout and fervently orthodox, Day surrendered none of her political radicalism. During the Great Depression she founded the Catholic Worker Movement to serve the poor. She argued for pacifism and challenged her co-religionists to live their faith more fully, to minister to the poor, and to challenge rather than be conformed to the age—not to settle too easily into the socially comfortable positions that were finally becoming available to Catholics.

I have long since come to believe that people never mean half of what they say, and that it is best to disregard their talk and judge only their actions. (“The Long Loneliness”)

Tradition! We scarcely know the word anymore. We are afraid to be either proud of our ancestors or ashamed of them. We cling to a bourgeois mediocrity which would make it appear we are all Americans, made in the image and likeness of George Washington. (“The Long Loneliness”)

We have all known the long loneliness and we have learned that the only solution is love and that love comes with community. (“The Long Loneliness”)

I wanted to die in order to live, to put off the old man and put on Christ. I loved, in other words, and like all women in love, I wanted to be united to my love.... I loved the church for Christ made visible. Not for itself, because it was so often a scandal for me.... There was plenty of charity but too little justice. (“The Long Loneliness”)

In fact, to this very day, common sense in religion is rare, and we are too often trying to be heroic instead of just ordinarily good and kind. (“Dorothy Day: A Biography”)

The Sainthood of Dorothy Day, by Louise and Mark Zwick