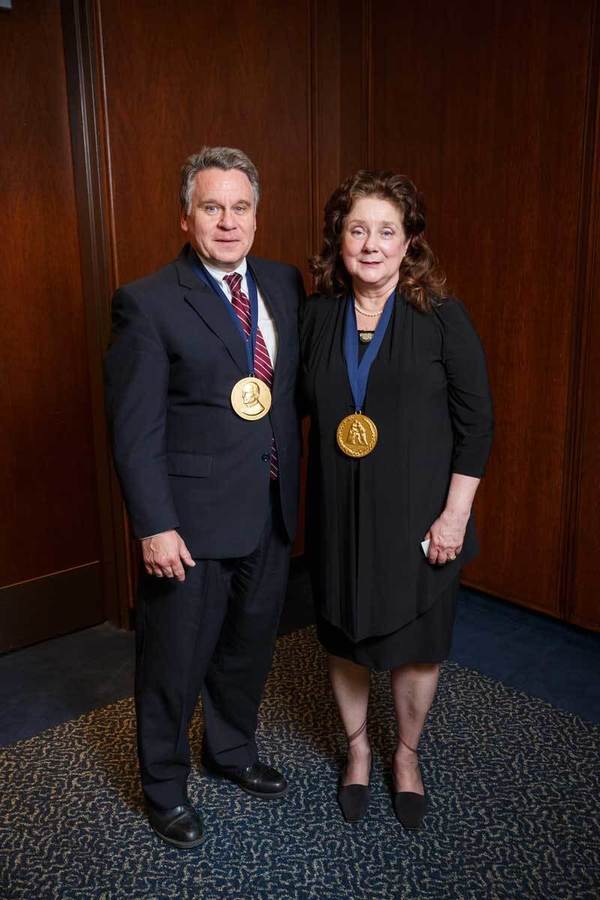 “Chris and Marie Smith have dedicated their lives to promoting the Culture of Life in the public square,” said Carter Snead, William P. and Hazel B. White Director of the Notre Dame Center for Ethics and Culture. “Through their tireless efforts to battle human trafficking and promote human rights, particularly the right to life of the unborn, Chris and Marie Smith provide a powerful witness to the dignity of all human life. We are honored to award them the Notre Dame Evangelium Vitae Medal.”

According to GovTrack.us, Representative Smith ranks fourth out of all 435 members in the House of Representatives in authoring bills that have successfully become law. The Homeless Veterans Comprehensive Assistance Act, Veterans Education and Benefits (GI Bill) Expansion Act, laws to combat autism, and the landmark Trafficking Victims Protection Act of 2000 and that law’s subsequent reauthorizations are among his most significant legislative achievements.

Representative Smith is the co-chair of the Bipartisan Pro-Life Caucus in the House of Representatives and the former Executive Director of the New Jersey Right to Life Committee. He is the author of the $265 million Stem Cell Therapeutic and Research Act of 2005, the groundbreaking law that established—for the first time—a nationwide program for ethical research and medical treatment using umbilical cord blood and bone marrow cells. Smith’s stem cell law was reauthorized in September 2010 for another five years. Another Smith initiative, the Federal Employee Health Benefits Amendment, was first passed in 1983 to prevent the funding of abortion in the federal employee health benefits program. This Smith amendment has been in effect all but two years since. Smith is also the author of the No Taxpayer Funding of Abortion Act, a legislative proposal for a comprehensive government-wide prohibition on taxpayer funding for elective abortion.

Marie Smith is the director of the Parliamentary Network for Critical Issues, a non-partisan global outreach of Gospel of Life Ministries that works to identify, unite, and strategize with pro-life groups, lawmakers, and religious leaders to advance respect for life in law and policy. Based in Washington, D.C., PNCI assists lawmakers and religious leaders from around the world in helping elected officials organize working groups in their legislatures to more effectively advance pro-life laws and build sustainable pro-life leadership in capitals around the world.

Marie is a frequent speaker at international and domestic conferences presenting the global challenges to a culture of life. She has served as an observer for the Holy See and on Holy See delegations to various conferences at the United Nations and the Organization of American States. Marie Smith was a recipient of the 2009–2010 Life Prizes Award in recognition of her global work to protect children and their mothers from the violence of abortion. She previously worked with Life Issues Institute and served as the International Director of Feminists for Life.

The Smiths have been pro-life advocates for over 40 years. They met at then–Trenton State College, now the College of New Jersey, where they both were active in the student pro-life group (which Chris co-founded, and which Marie later chaired). They are the parents of four grown children and have three grandchildren. Read the congressman's full remarks at the awards banquet here.

The Notre Dame Evangelium Vitae Medal honors individuals whose outstanding efforts have served to proclaim the Gospel of Life by steadfastly affirming and defending the sanctity of human life from its earliest stages. The award, which is announced annually on Respect Life Sunday, the first Sunday of October, consists of a specially commissioned medal and (if permissible) a $10,000 prize, to be presented at a spring banquet. Previous recipients of the Medal include Richard Doerflinger, associate director of the United States Conference of Catholic Bishops’ Secretariat for Pro-Life Activities; Helen M. Alvaré, associate professor of law at George Mason University; and Mother Agnes Mary Donovan and the Sisters of Life.