2015: Carl Anderson and the Knights of Columbus 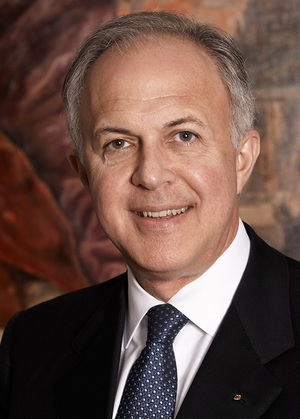 The Notre Dame Center for Ethics and Culture awarded the 2015 Notre Dame Evangelium Vitae Medal to Carl Anderson and the Knights of Columbus.

“Since its inception, the Knights of Columbus has protected and supported the most vulnerable among us,” said Carter Snead, William P. and Hazel B. White Director of the Notre Dame Center for Ethics and Culture. “Its members have been at the forefront of the struggle to promote a culture of life through their work at the local, national, and international levels. They have tirelessly volunteered, educated, advocated, donated, and prayed on behalf of every human life from conception to natural death. Supreme Knight Carl Anderson and the Knights of Columbus richly deserve to be recognized as heroic contributors to the pro-life cause; they embody the spirit of the Notre Dame Evangelium VitaeMedal.”

The Knights of Columbus is a Roman Catholic organization with 1.8 million members worldwide dedicated to good works and informed by the principles of charity, unity, fraternity, and patriotism. Anderson has served as Supreme Knight for fourteen years and has led the Knights and their families to unprecedented levels of charitable giving and support for their communities and the Church. Over the past decade, under his guidance, the organization has donated more than 664 million hours of service and $1.4 billion to charity, including the donation of over 268 ultrasound machines valued at more than $14 million to pregnancy resource centers in 44 states and Canada.

Supreme Knight Carl Anderson received the Evangelium Vitae Medal on April 26, 2015, joined by hundreds of fellow Knights, pro-life leaders, students, and friends of the University. Bishop Kevin Rhoades, bishop of Fort Wayne-South Bend, celebrated Mass in the Basilica of the Sacred Heart, followed by a gala dinner in the South Dining Hall. Read the news story describing the celebration.

The Evangelium Vitae Medal celebration was also featured during the Notre Dame Day campaign's live webcast, in an interview with Supreme Knight Carl Anderson and Rev. William R. Dailey, C.S.C., the Thomas More Fellow of the Center for Ethics and Culture: