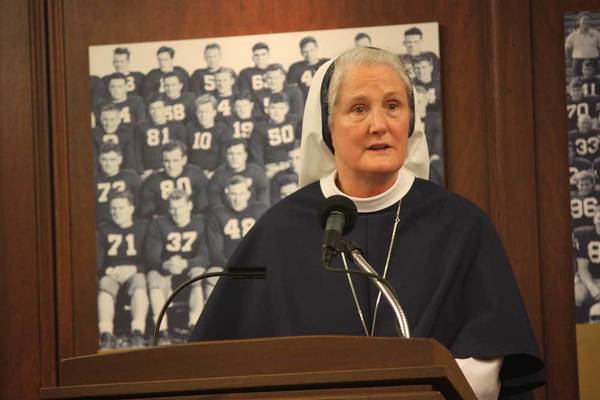 Founded in 1991 by Cardinal John O’Connor, the Sisters of Life is a contemplative and active religious community of women. As in most religious communities, its members take the three traditional vows of poverty, chastity and obedience, as well as a fourth vow to protect and enhance the sacredness of human life. In addition to their contemplative prayer, they provide hospitality and support for pregnant women and lead “Hope and Healing” retreats serving women and men who have suffered from abortion.

Agnes Mary Donovan was among the first eight women to join the community, which now has more than 70 members. Before entering religious life, she earned a doctoral degree in psychology from the University of North Carolina at Chapel Hill in 1985 and served on the psychology faculties of the College of William and Mary and Columbia University, where she was director of research of Columbia’s Literacy Center. A licensed clinical psychologist, she also worked in a private practice. She became superior general of the Sisters of Life in 1993. The Notre Dame Evangelium Vitae Medal honors individuals whose outstanding efforts have served to proclaim the Gospel of Life by steadfastly affirming and defending the sanctity of human life from its earliest stages. The award, which is announced annually on Respect Life Sunday, the first Sunday of October, consists of a specially commissioned medal and $10,000 prize.