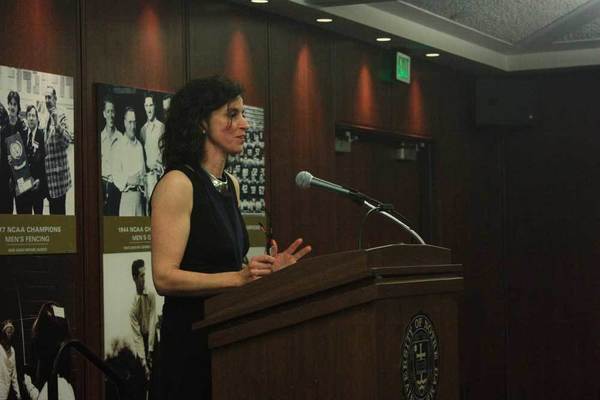 “Helen Alvaré has courageously and powerfully defended the cause of life against all comers for two decades,” said David Solomon, William P. and Hazel B. White Director of the Center for Ethics and Culture. “In some of the darkest hours for the pro-life cause in this country, her voice was heard clearly. With a public presence in the popular debate, a foot in the scholarly world that bolsters and sustains the deep arguments on life issues, and her extraordinary ability to connect with people, she has been a hero to us all. We are honored to award her the Notre Dame Evangelium Vitae Medal.”

The Notre Dame Evangelium Vitae Medal, which is announced annually on Respect Life Sunday, the first Sunday of October, consists of a specially commissioned medal and $10,000 prize, to be presented at a spring banquet. Richard Doerflinger, associate director of the United States Conference of Catholic Bishops' Secretariat for Pro-Life Activities, was the medal’s 2011 recipient.

Alvaré earned her law degree from Cornell University in 1984 and a master's degree in systematic theology from the Catholic University of America in 1989. She has practiced with the Philadelphia law firm of Stradley, Ronon, Stevens & Young, specializing in commercial litigation and free exercise of religion matters. Before joining George Mason’s law school faculty, she taught at Catholic University’s Columbus School of Law.

In 1987, Alvaré joined the Office of General Counsel for the National Conference of Catholic Bishops(NCCB), drafting amicus briefs in leading U.S. Supreme Court cases concerning abortion, euthanasia, and the First Amendment’s establishment clause. For the next ten years, she worked with the Secretariat for Pro-Life Activities at the NCCB, lobbying, testifying before federal congressional committees, lecturing nationwide, and speaking on numerous television and radio programs for the U.S. Catholic bishops. She also assisted the Holy See on matters concerning women, marriage and the family, and respect for human life.

Alvaré chaired the commission investigating clerical abuse in the Archdiocese of Philadelphia and was an advisor to Pope Benedict XVI's Pontifical Council for the Laity, as well as an ABC News consultant. Her scholarship concerns current controversies about abortion’s impact on women, marriage, parenting, and the new reproductive technologies.