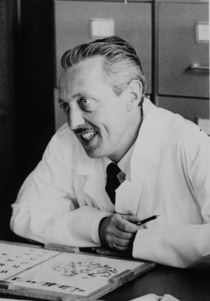 The Notre Dame Center for Ethics and Culture will award the 2017 Notre Dame Evangelium Vitae Medal to the Jerome Lejeune Foundation at a Mass and Banquet on April 29, 2017.

“Professor Lejeune was a man of great faith, a brilliant geneticist, and a prophetic voice on behalf of people who suffer from intellectual disabilties,” said O. Carter Snead, William P. and Hazel B. White Director of the Notre Dame Center for Ethics and Culture. “He spent his professional life engaged in cutting-edge scientific research into the genetic causes of disabilities like Down syndrome and trisomy 18. He was motivated by deep compassion and an abiding love for disabled people, born and unborn. Today, the Jerome Lejeune Foundation carries on Professor Lejeune’s work by sponsoring ethically-conducted genetic research, securing healthcare for those with disabilities, and performing advocacy on behalf of the disabled in light of our shared human dignity.” Snead concluded, “The Jerome Lejeune Foundation perfectly embodies the spirit of the Notre Dame Evangelium Vitae Medal.”

University of Notre Dame President Rev. John I. Jenkins, C.S.C., said: “We are proud to award this medal to the Jerome Lejeune Foundation to honor them for their inspiring commitment to serve the most vulnerable -- and often least valued -- among us and, through their compassionate work around the world, to build a culture of life and love.”

Professor Jerome Lejeune, born in 1926 in Montrouge, France, established the first specialized clinic for Down syndrome patients at Necker Children’s Hospital near Paris. In 1958, while studying chromosomes linked to Down syndrome, he discovered an unexpected third chromosome on the 21st pair, a genetic abnormality he named trisomy 21 (Jérôme Lejeune, Marthe Gautier, and Raymond Turpin. Human chromosomes in tissue culture. C. R. Acad. Sciences, 26 January 1959). This discovery was the first to link an intellectual disability to a genetic cause. Professor Lejeune also conducted pioneering research into trisomy 18 and trisomies on the 8th and 9th chromosomal pairs. 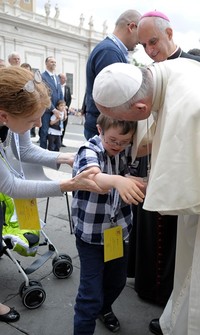 Having discovered the genetic causes of these intellectual disabilities, Professor Lejeune diligently sought therapies to ameliorate their effects, believing that eventually a cure would be found for trisomies. Professor Lejeune also devoted his life to protecting unborn children with Down syndrome from so-called “therapeutic abortion,” which he regarded as a grave corruption of the medical art and a violation of the physician’s duty to do no harm and always seek the good of his or her patient. “Medicine becomes mad science when it attacks the patient instead of fighting the disease,” he said. “We must always be on the patient’s side, always.”

In 1962, Professor Lejeune was honored by President John F. Kennedy with the first Kennedy Prize for his research into intellectual disabilities. In 1969 he received the William Allen Award from the American Society of Human Genetics, the highest award possible for a geneticist. Widely considered the ‘father of modern genetics,’ Professor Lejeune was appointed by Pope St. John Paul II as the first president of the Pontifical Academy for Life, which advises the pope on issues surrounding the promotion and defense of human life, especially in bioethics. Professor Lejeune died on April 3, 1994. He was recognized as a “Servant of God” by the Vatican’s Congregation for the Causes of Saints in 2012.

The Jerome Lejeune Foundation was established in 1996 to continue the professor’s work in research, advocacy, and healthcare for those with intellectual disabilities. With branches in Paris, Philadelphia, Madrid, and Dubai, the Foundation is the largest private funder of research into genetic therapies in the world. In addition to funding ethically-conducted research, the Foundation provides direct health care and education, and advocates for legal protections for persons with disabilities. Led by Chairman Jean-Marie Le Méné and Vice President Berthe Lejeune (Dr. Lejeune’s widow), the Foundation conducts this essential work in its namesake’s spirit of radical generosity, hospitality, and love of the most vulnerable members of the human family. 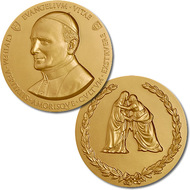 The Notre Dame Evangelium Vitae Medal is the nation’s most important lifetime achievement award for heroes of the pro-life movement, honoring individuals whose efforts have served to proclaim the Gospel of Life by steadfastly affirming and defending the sanctity of human life from its earliest stages. The 2016 medal was awarded to the Little Sisters of the Poor. Previous recipients include Richard Doerflinger, associate director of the USCCB’s Secretariat for Pro-Life Activities; Helen M. Alvaré, associate professor of law at George Mason University; Mother Agnes Mary Donovan and the Sisters of Life; Congressman Chris Smith, co-chair of the Bipartisan Congressional Pro-Life Caucus, and his wife, Marie Smith, director of the Parliamentary Network for Critical Issues; and Supreme Knight Carl Anderson and the Knights of Columbus.

Announced annually on Respect Life Sunday, the first Sunday of October, the Notre Dame Evangelium Vitae award consists of a specially commissioned medal and $10,000 prize, to be presented at a banquet that will be held at Notre Dame on April 29, 2017. More information about the celebration on the following page: http://ethicscenter.nd.edu/events/2017/04/29/2017-evangelium-vitae-medal-mass-and-banquet/