A Nobel laureate and the Vatican’s leader on Church doctrine were just two of the more than 60 distinguished scholars and 600 guests who gathered at Notre Dame for the Center for Ethics and Culture’s 15th Annual Fall Conference (October 30–November 1), an event that opened with a personal greeting from Pope Francis. 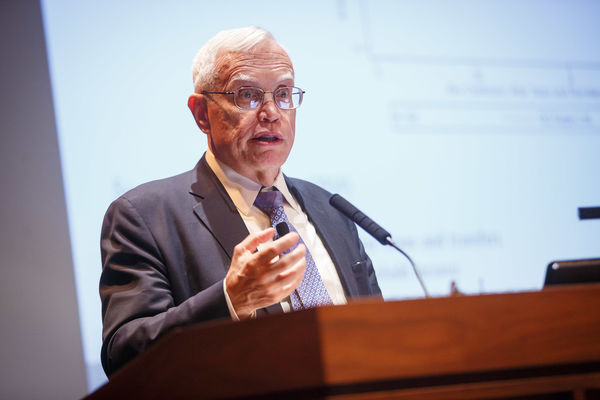 James Heckman, a professor of economics at the University of Chicago and the 2000 Nobel laureate in economics, and Gerhard Cardinal Müller, the prefect of the Congregation for the Doctrine of the Faith, offered their reflections on the theme of poverty and how to care rightly for the poor, headlining a three-day event that included presentations by national and international leaders in law, political theory, philosophy, history, theology, economics, and the arts.

The papal greeting that opened the conference was delivered by Bishop Kevin Rhoades (Fort Wayne–South Bend) at Thursday’s Mass at the Basilica of the Sacred Heart. “The Holy Father sends cordial greetings,” Bishop Rhoades read, and “trusts that this gathering will make a lasting contribution to overcoming the ‘globalization of indifference’ (Evangelii Gaudium, 54) through the promotion of a ‘globalization of solidarity.’”“The range of speakers brought together by the Fall Conference represents the best expression of Notre Dame’s mission to ‘provide a forum where, through free inquiry and open discussion, the various lines of Catholic thought may intersect with all the forms of human knowledge,’” said Center director O. Carter Snead, a professor at the University of Notre Dame Law School.

Following Mass, Heckman delivered his keynote address, titled “Predistribution: A Strategy for Promoting Flourishing Lives,” where he argued that the disparity between rich and poor is not simply a question of income but of skill—more specifically, the early character formation and inculcation of virtues that enable young people to succeed later in life.

“Character is more important than intellect,” he said, quoting Emerson;  predistribution is “a strategy of giving skills to people to avoid [poverty] in the first place…a strategy that builds character, promotes family values, and creates skills…[such that] what is socially fair can also be viewed as economically efficient.”

Joseph Kaboski, a professor of economics at Notre Dame and former student of Heckman’s, responded to Heckman’s address by contextualizing his remarks within the framework of Catholic social thought, pointing to the Church’s long history of holding up the family as the true foundation of a strong society.

Friday brought presentations from such distinguished Notre Dame figures as Alasdair MacIntyre, John Finnis, and Gary Anderson. In a presentation on “Heedlessness,” MacIntyre, the senior distinguished research fellow emeritus at the Center, argued that we must reinvigorate our understanding of common goods to battle structural injustices within our society, while Finnis, a professor of law and the Center’s current senior distinguished research fellow, reflected on the origin and meaning of the phrase “Blessed are the poor.” Other panels examined the family’s role in alleviating poverty, the link between poverty and abortion, and the efficacy of different policy responses to poverty at home and abroad. 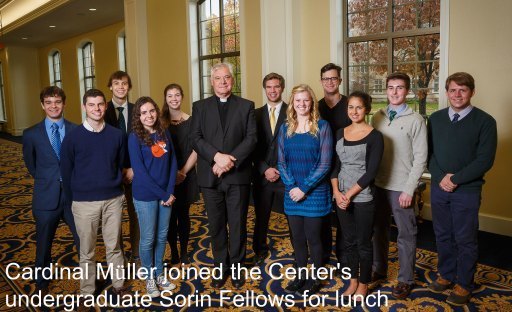 The highlight of Friday evening was a conversation between Cardinal Müller and Center director Carter Snead on the subject of the cardinal’s book Poor for the Poor: The Mission of the Church. Cardinal Müller described that mission as the effort “to free mankind from the poverty of our fallen condition and constantly remind us that we are created in the image and likeness of God; we are the object of his divine love; we are called to the richness of eternal life with him.”

Cardinal Müller also went on to express his gratitude to the Center for “its tremendous impact on Notre Dame’s Catholic mission on campus and for its indispensable role as a crucial part of Notre Dame in transforming the culture through its programming, cutting-edge research, and public witness. Father Sorin would be proud of the Center for Ethics and Culture for  its successes in realizing his dream that Notre Dame be a force for great good in the world.” Earlier in the day, the cardinal met for a private lunch with the Center’s undergraduate Sorin Fellows, where students were able to speak with him about his work in the Vatican and the recent extraordinary synod on the family.

Saturday continued with panels on Pope Francis and the preferential option for the poor, with theologians Thomas D. Williams and Michael Baxter; an examination of “Why the Poor Need Beauty” with famed Notre Dame architect Duncan Stroik and John Haldane, professor of philosophy at the University of St. Andrews and the Center’s 2013–14 Remick Fellow; and a discussion of the importance of Catholic schools, not just for poor children but for their communities, with Notre Dame law professor Nicole Garnett (author of Lost Classroom, Lost Community: Catholic Schools' Importance in Urban America), Archbishop Fernando Chomali Garib of Concepción, Chile, and Shavar Jeffries, an attorney, school choice advocate, and former mayoral candidate in Newark, NJ. 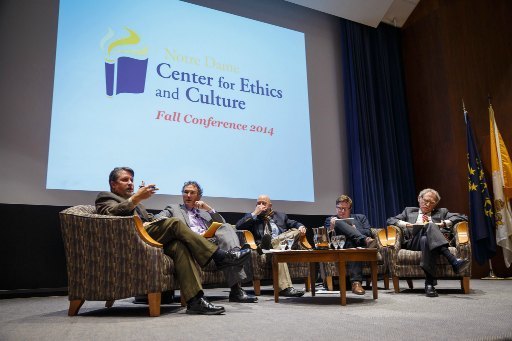 The conference closed, as it does every year, with a more informal discussion of some of the themes considered throughout the weekend. This year, the de Nicola Family Colloquy focused on the question, “American Capitalism and Catholic Social Teaching: Are They Compatible?” Hadley Arkes (Amherst College), Patrick Deneen (Notre Dame), James Mumford (Institute for Advanced Studies in Culture at the University of Virginia), and John Tomasi (Brown University) grappled with the question of capitalism’s impact on our sense of moral duty on the one hand, and whether it might be the best means of pursuing social justice on the other.

The discussion was lively and thought-provoking, bringing together in conversation the best of both Catholic and secular thought—a fitting end to a weekend of serious reflection and passionate engagement on some of the most pressing issues surrounding the problem of poverty today.