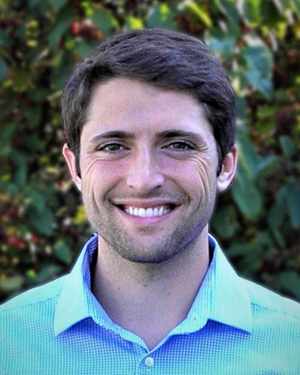 The de Nicola Center for Ethics and Culture is pleased to announce the recipient of the Polking Family Fellowship for the 2019–20 academic year. Michael Bradley, who earned his Bachelor of Arts and a subsequent Master's in Theological Studies at Notre Dame, has returned to campus to begin studies at Notre Dame Law School, joining existing Polking Fellows Hope Steffensen (3L) and Aly Cox (2L).

"The Polking Family Fellowship is awarded to outstanding incoming law students who understand the connection between the law, public policy, and building a sustainable culture of life," said O. Carter Snead, director of the de Nicola Center for Ethics and Culture and professor of law. "We are excited to welcome Michael back to Notre Dame and are looking forward to working closely with him once again as he pursues his studies in law. He has grown up alongside the Center from its earliest days, and we are delighted to have him and his family back with us on campus."

Bradley is a native of South Bend, growing up in the shadow of the Golden Dome as one of eight children, all of whom attended Notre Dame. He began participating in Center events while in grade school, and during his time at Notre Dame was a regular attendee of the Center’s Bread of Life dinners, Evangelium Vitae Medal celebrations, and the Fall Conference. His senior thesis was co-directed by the Center's founding director, David Solomon. After earning his undergraduate degree in philosophy and theology in 2014, he worked for a year as a research and programs assistant with the Tocqueville Program for Inquiry into Religion and Public Life in the Department of Political Science, and then pursued his graduate studies. Following the completion of his master’s degree in 2017, he worked as the communications and events coordinator for the Lumen Christi Institute for Catholic Thought in Chicago.

"As someone who has been benefiting from the de Nicola Center for Ethics and Culture's programs since I was in grade school, I'm honored and humbled to have now the opportunity to represent the Center and contribute to its mission as one of its Polking Fellows," Bradley said. "My wife and I are deeply grateful to the selection committee and to Professor Snead for the vocational, academic, and financial support that the fellowship promises to afford me during my studies at Notre Dame Law School, which I am confident will prepare me well for a career of service to the Church and for the common good of society," he concluded.

The Polking Family Fellowship was established in February 2016 to recruit and provide funding for top law school candidates who have a demonstrated passion for the Catholic mission of the Law School and who share Notre Dame’s commitment to the inalienable dignity of every human life from conception to natural death. The fellowship was made possible through a generous endowment made by Paul and Joan Polking. Paul Polking ’59 B.S., ’66 J.D., is a retired executive vice president and general counsel for the Bank of America Corporation. He is also a member of the Law School Advisory Council.