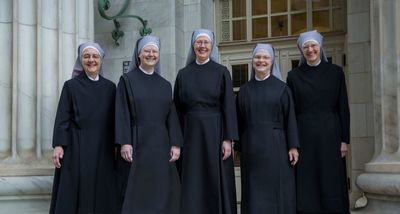 The Notre Dame Center for Ethics and Culture will award the 2016 Notre Dame Evangelium Vitae Medal to the Little Sisters of the Poor and their Mother Provincial, Sr. Loraine Marie Maguire.

“For more than 175 years, the Little Sisters of the Poor have dedicated their lives to humble service of the most vulnerable among us,” said O. Carter Snead, William P. and Hazel B. White Director of the Notre Dame Center for Ethics and Culture. “Their work and witness embody the goods at the heart of the Evangelium Vitae Medal. Their unwavering defense of the unborn in the HHS mandate litigation, alongside their longstanding work to care for the elderly poor, offers a beautiful and powerful witness to the unique, inviolable dignity of every person, from conception to natural death. Their work is a testament to the radical solidarity and hospitality at the core of the Gospel of Life.”

University of Notre Dame President Rev. John I. Jenkins, C.S.C., said: “We are delighted to award this medal to the Little Sisters of the Poor to honor them for their inspiring efforts to build a Culture of Life, where every member of the human family is welcomed and embraced. They are most deserving of this year’s Evangelium Vitae Medal.”

The Little Sisters of the Poor are an international congregation of women religious dedicated to serving the elderly poor. Founded in 1839 by St. Jeanne Jugan, the Little Sisters now operate in 31 countries around the world, with 30 homes in the United States that offer health care and assisted living for more than 13,000 low-income seniors.

In 2012, led by Maguire, the Little Sisters of the Poor became the face of religious nonprofit organizations struggling against a federal mandate to facilitate access to contraceptives and drugs that (according to FDA labeling) may function by causing the death of newly conceived human beings.

In his recent visit to the United States, Pope Francis met with the Little Sisters in Washington, D.C., to offer his support for their courageous resistance in a case that appears to be headed to the U.S. Supreme Court.

The Evangelium Vitae Medal is the nation’s most important lifetime achievement award for heroes of the pro-life movement, honoring individuals whose efforts have served to proclaim the Gospel of Life by steadfastly affirming and defending the sanctity of human life from its earliest stages. Previous recipients of the medal include Richard Doerflinger, associate director of the USCCB’s Secretariat for Pro-Life Activities; Helen M. Alvaré, associate professor of law at George Mason University; Mother Agnes Mary Donovan and the Sisters of Life; Congressman Chris Smith, co-chair of the Bipartisan Congressional Pro-Life Caucus, and his wife, Marie Smith, director of the Parliamentary Network for Critical Issues; and Carl Anderson and the Knights of Columbus.

Announced annually on Respect Life Sunday, the first Sunday of October, the Evangelium Vitae award consists of a specially commissioned medal and $10,000 prize, to be presented at a banquet that will be held at Notre Dame on April 9, 2016.