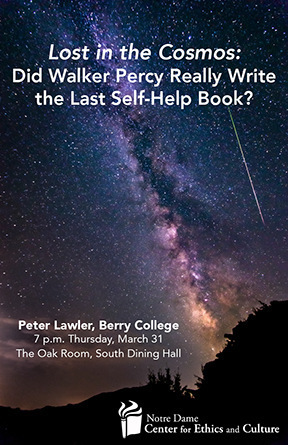 The Center for Ethics and Culture mourns the death of Peter Augustine Lawler of Berry College, who passed away on May 23, 2017. Lawler had been a frequent speaker and guest at Notre Dame events over the years, most recently in March 2016 when he presented on Walker Percy's Lost in the Cosmos: The Last Self-Help Book as part of the CEC's Catholic Culture Series.

Center director Carter Snead said, "The sudden loss of Peter Lawler is heartbreaking. He was, of course, a subtle, faith filled, and humane scholar, teacher, and voice in the public square. But most importantly, he was a great and irreplaceable friend to many of us at Notre Dame."

Professor Lawler was a political philosopher and the Dana professor of government at Berry College. He was the author or editor of eighteen books including A Political Companion to Walker Percy, and was a frequent contributor to National Review Online, the Weekly Standard, National Affairs, the New Atlantis, and other publications. Dr. Lawler served on President George W. Bush’s Council on Bioethics. In 2007 he received the Weaver Prize for Scholarly Excellence. He was appointed in 2017 as the editor of Modern Age, the journal of the Intercollegiate Studies Institute.