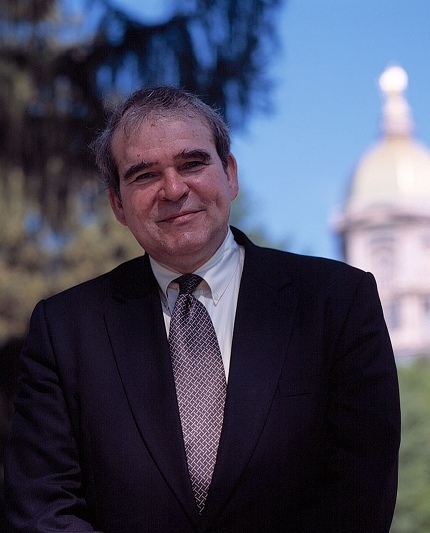 As the Notre Dame Center for Ethics and Culture's 17th Annual Fall Conference came to a close, William P. and Hazel B. White Director O. Carter Snead announced the establishment of a $1.25 million endowed graduate student fellowship honoring the Center's founding director, David Solomon. "Professor Solomon is the visionary who had the will, the creativity, the insight, the judgment, and the energy to create the Center for Ethics and Culture so many years ago," said Snead. "We are very pleased that, in perpetuity, there will be a David Solomon Fellow in the College of Arts and Letters who will share David's passion for the Catholic mission of the University of Notre Dame."

David Solomon began his legendary career at Notre Dame in 1968 and retired in May 2016. During his tenure, he served as the director of undergraduate studies in the philosophy department, founded and directed the Arts & Letters/Science Honors Program, and directed the Notre Dame London Program. An excellent academic administrator, his real passion was teaching and mentoring students. Each spring semester, more than 200 undergraduates took his signature ethics course, "Morality and Modernity," based on Alasdair MacIntyre's seminal book After Virtue. He also taught medical ethics to more than 250 undergraduate students each year, as well as upper-division courses in contemporary ethics and special topics in ethics. At the graduate level, he taught the entry-level course "20th Century Ethical Theory" and directed more than 40 doctoral dissertations.

Professor Solomon founded the Center for Ethics and Culture in 1999 with the aim of bringing "the great treasures of the Catholic moral and intellectual tradition to bear upon the most pressing ethical questions of the day." He secured MacIntyre's return to Notre Dame to serve as the Center's inaugural Permanent Research Fellow and established an interdisciplinary Board of Advisors from top-tier academic institutions to help guide the CEC's vision. Professor Solomon handed the reins of the Center to Professor Snead in 2012.

Upon his retirement, tributes to Professor Solomon poured in from grateful students, alumni, and his academic peers. The Notre Dame Observer published an op-ed by student Christopher Damian entitled, "The End of An Era," while fellow professor Rick Garnett referred to Solomon as a "Notre Dame Legend" in the Mirror of Justice blog. Professor Solomon remains active in cataloging his archives regarding the history of the CEC.

The fellowship is funded by an anonymous donor. It will be awarded to outstanding graduate students whose interests intersect with the work of the Center, and who have a demonstrated passion for its mission. David Solomon Fellows will participate in the intellectual life of the CEC through involvement in its research, academic programming, and student formation initiatives.