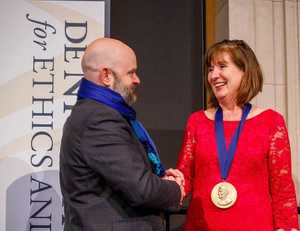 The University of Notre Dame de Nicola Center for Ethics and Culture presented the 2019 Notre Dame Evangelium Vitae Medal to the Women’s Care Center, the largest network of pregnancy resource centers in the United States, at a Mass and dinner attended by more than 600 guests and friends on April 27, 2019. The celebration can be viewed on the Center's YouTube channel here.

The Notre Dame Evangelium Vitae Medal, named for St. John Paul II's 1995 encyclical on life issues, is the nation’s most important lifetime achievement award for heroes of the pro-life movement, honoring individuals whose efforts have served to proclaim the Gospel of human life by steadfastly affirming and defending its sanctity from its earliest stages.

“The Women’s Care Center has built a model of service rooted in John Paul the Great’s vision of radical hospitality, welcoming women precisely in their moment of greatest vulnerability and deepest need,” said O. Carter Snead, director of the de Nicola Center for Ethics and Culture. “Theirs is a ministry of love, based not on the proposition of an argument but on an encounter with the unique and unrepeatable individual before them.”

The first Women’s Care Center was established near the University of Notre Dame in 1984 by Dr. Janet E. Smith, then a young professor at the university. From its first location in a “little blue house” next to an abortion clinic, the Women's Care Center has grown to 32 pregnancy resource center locations in 11 states and serves more than 26,000 women annually. The Women’s Care Center provides free, confidential counseling and education to women facing unplanned pregnancies, as well as ongoing support in the form of parenting classes, referrals for mother and baby care, and tangible goods such as diapers and car seats. WCC locations can be found in Florida, Illinois, Indiana, Kentucky, Maryland, Michigan, Minnesota, North Dakota, Ohio, Pennsylvania and Wisconsin.

“We have literally grown up in the shadow of the Golden Dome of Our Lady,” said Ann Mannion, volunteer president of the Women's Care Center. “And since [our] inception, students of this university, and St. Mary’s [College], have volunteered at our centers and some have come back to us after graduation to become full-time counselors.” While the number of WCC locations has grown, Mannion continued, “the sole focus was on how to best love and serve the next woman who walks through our doors. And this hasn’t changed.” She concluded, “This award gives us the validation and the courage to continue to grow this mission on a national level. But it always starts with one. One woman a time. And one baby at a time.”

“At the center, we stay out of politics, but instead, we focus on caring for our neighbor,” said Bobby Williams, director of the Women’s Care Center Foundation. “At the center, we do not look to the darkness, but rather, we look to the light. The light is the hearts of the brave young women who walks through our doors. The light is our counselors, our nurses, our parenting instructors, our staff, who have chosen to sacrifice much, to serve hundreds of courageous women and their babies each and every day.”

In his homily during Mass in the Basilica of the Sacred Heart (YouTube link to the Mass) prior to the medal presentation, Bishop Kevin C. Rhoades of the Diocese of Fort Wayne–South Bend, himself a member of the WCC governing board, described “the secret of the success of the Women’s Care Center: the genuine reverence and love they show for every woman who enters their doors and the real reverence and love they have for the babies these women carry in their wombs.” He continued, “Our Women’s Care Centers are like oases of God’s mercy in the desert of this culture of death. That’s why it’s a special priority of our Centers to be located near abortion clinics. Women can go into an oasis of love, rather than into a place that violates the natural love of a mother for her child.” 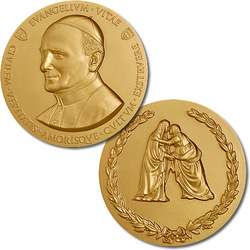