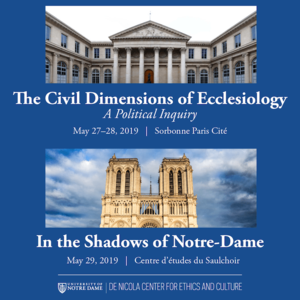 “We are grateful for our many partners in Europe who have helped us in our efforts to expand the global reach and impact of the de Nicola Center over the past few years,” said dCEC director Carter Snead. “This initiative in France, like our longstanding collaboration with colleagues in Rome, Florence, and Milan, provides a unique forum for genuinely interdisciplinary scholarly dialogue and exchange for the world’s leading thinkers in the Catholic tradition, as well as from many other perspectives and backgrounds.”

“Now in its third year, this project gathers researchers from across the United States and Europe to discuss important aspects of the relationship of Christianity and the Western political, cultural, theological and intellectual tradition,” said Patrick J. Deneen, Professor of Political Science and the David A. Potenziani Memorial College Chair at the University of Notre Dame. “The de Nicola Center for Ethics and Culture has established a profound colloquy that brings together Europe and America’s most esteemed thinkers, as well as rising scholars, to explore Christian contributions to modern life.” 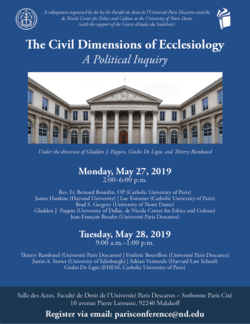 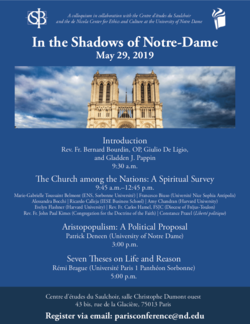 The May 29 colloquium, "In the Shadows of Notre-Dame," will feature keynote lectures by Patrick Deneen (University of Notre Dame) and Rémi Brague (Sorbonne), with additional presentations by a slate of international scholars discussing “The Church among the Nations.” (Click poster thumbnail to expand the detail.)

“For a time, modern political culture, drawing on Christian sources, looked as though it had found a way to incorporate Christian conviction and a secular public square in salutary ways,” said Brad S. Gregory, the Dorothy G. Griffin College Chair of History at the University of Notre Dame. “With the evident fraying of that relationship now acknowledged by commentators on all sides, it is time to analyze the connections among Christian faith, politics, history, and society in order to understand how we have arrived at our situation and to seek paths forward. These conferences of the de Nicola Center for Ethics and Culture are both raising crucial questions and opening a new dialogue among fellow scholars on both sides of the Atlantic.”

For more information or to register for the colloquia, visit ethicscenter.nd.edu/paris2019 or email parisconference@nd.edu.