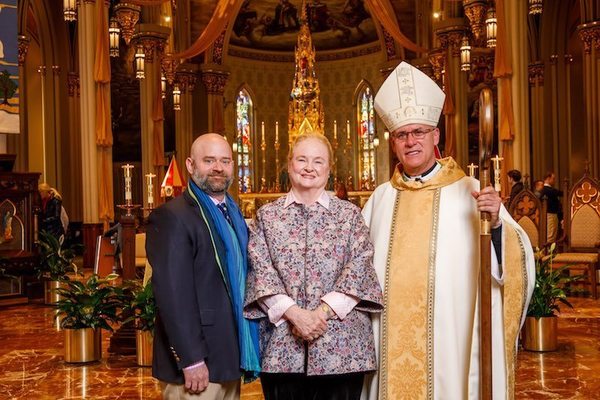 The Center for Ethics and Culture presented the Notre Dame Evangelium Vitae Medal to Harvard Law School professor and former US Ambassador to the Holy See Mary Ann Glendon at a Mass and banquet on April 28, 2018.

The Notre Dame Evangelium Vitae Medal, named for St. John Paul II's 1995 encyclical on life issues, is the nation’s most important lifetime achievement award for heroes of the pro-life movement, honoring individuals whose efforts have served to proclaim the Gospel of human life by steadfastly affirming and defending its sanctity from its earliest stages.

In his homily at the Evangelium Vitae Mass in the Basilica of the Sacred Heart, Bishop Kevin C. Rhoades praised Glendon's lifetime of witness as a fruit of her Christian faith. "Professor Mary Ann Glendon's intelligent and courageous witness to the Gospel in her profession and in her generous service of the Church is undoubtedly a fruit of her communion with Jesus," he said. "May the Lord bless Professor Mary Ann Glendon and all of us as we celebrate the Gospel of Life this evening!" (Video of the Mass is available on the CEC's YouTube page.)

The medal presentation took place at a banquet that filled the university's South Dining Hall with more than 500 friends, family, faculty, and students. Special guests included Lord Nicholas Windsor, a member of the Pontifical Academy for Life; Congressman Dan Lipinski, U.S. Representative from Illinois; and Laurent and Humbeline Frémont, attachés of the French Embassy in Washington, D.C.

In his remarks at the banquet, Center Director O. Carter Snead praised Ambassador Glendon as a personal hero and mentor, and reflected that the annual Evangelium Vitae Medal celebration represents the heart of Notre Dame's mission in and to the world. "Look around you tonight, at this room filled with students, faculty, and friends, gathered to celebrate life and human dignity," he said. "This is Notre Dame!" (Video from the banquet is on the Center's YouTube page.) 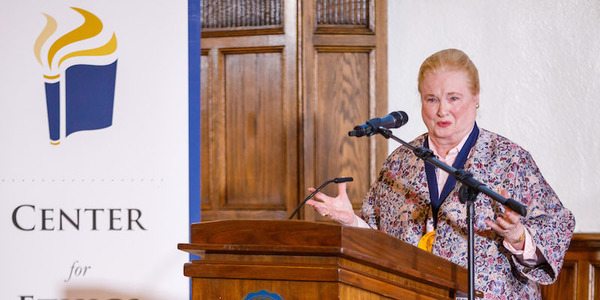 In her remarks, Ambassador Glendon reflected that the medal was a recognition of the rank-and-file women and men who are the backbone of the pro-life cause. "Notre Dame, by honoring me tonight, is paying tribute to the great movement to which it has been my privilege to belong. It was not without reason that my dear friend Richard John Neuhaus called the pro-life movement the most broad-based, the most diverse, and the most sustained expression of grassroots civic participation America has ever seen."

She recalled this grassroots nature of the movement among her own circle of friends, as in 1990 they formed a Boston-area organization called "Women Affirming Life" that proudly proclaimed itself as “pro-life, pro-woman, pro-child, and pro-poor.” "Our membership grew and our members, according to their gifts and inclinations, threw themselves into assisting women in crisis pregnancies, organizing educational events, lobbying at the State House, and providing that important kind of education that takes place in the home," she said. "When Evangelium Vitae appeared [in 1995], we felt as though John Paul II himself had blessed every aspect of the work our members were doing."

"The prolife movement was built from the ground up by men and women from all races, nationalities, religions, and walks of life, offering what they could with what they had," she continued. "And that is the secret of the progress it has made in the places where it counts most: in the hearts and minds of American men and women."

Ambassador Glendon's remarks inspired a standing ovation as she concluded, "Today, Our Lady’s University has smiled on the rank and file of the great human rights cause of our time. For that I can only say: thank you, Notre Dame!"

“In transforming culture so that it supports life,” Pope St. John Paul II writes in Evangelium Vitae, “women occupy a place, in thought and action, which is unique and decisive” (EV 99). Tonight’s honoree occupies a place unique among defenders of life: Through her work and witness, Mary Ann Glendon has consistently battled the destructive forces arrayed against women, children (born and unborn), and the family in modern society with extraordinary grace, clarity, and compassion.

Raised in the small town of Dalton, Massachusetts, Glendon saw firsthand the interconnectedness of the human family and our ultimate dependence upon one another -- in birth and death, in illness and disability, in brokenness and need. The lessons she learned in Dalton were later reinforced for her in the writings of John Paul II, who envisioned a society of radical hospitality that saw “the defence of the fundamental rights of the human person, especially the weakest, as its primary duty” (EV 101).

Glendon carried these lessons with her through a brilliant legal career that began with a Bachelor of Arts, Juris Doctor, and Master of Comparative Law at the University of Chicago, leading her ultimately to Harvard Law School in 1987, where she is today the Learned Hand Professor of Law. Her work in constitutional law, human rights, comparative law, and political theory has earned her the respect and admiration of her peers and prestigious honors from the academy, including the National Humanities Medal, the Bradley Foundation Prize, and honorary doctorates from numerous universities.

Through her work, Glendon has consistently recognized the “decisive role” the law plays “in influencing patterns of thought and behaviour” in our society (EV 90). Thirty years ago, in her seminal work Abortion and Divorce in Western Law, Glendon laid bare the truth about America’s abortion jurisprudence: that the United States has the most radically unregulated abortion regime of any developed Western country, while simultaneously offering the fewest protections for mothers and their unborn children. “Our law,” she writes, “stresses autonomy, separation, and isolation in the war of all against all,” leaving exposed the weakest and most vulnerable members of our society. That lack of protection in the law, Glendon argued, has in turn clouded our moral vision, weakening our society’s ability to recognize the dignity of the hidden life in the womb.

Glendon’s words perfectly echo Pope John Paul’s, who saw the “tragic denial” of human rights “in a notion of freedom which exalts the isolated individual in an absolute way, and gives no place to solidarity, to openness to others and service of them.” “Such a culture of death,” John Paul continues, “betrays a completely individualistic concept of freedom, which ends up … becoming the freedom of ‘the strong’ against the weak, who have no choice but to submit” (EV 19).

This “freedom of the strong against the weak” was nowhere more dramatically on display than in the deliberations at the United Nations’ 1995 World Conference on Women in Beijing. It is no surprise, then, that John Paul would choose Glendon to lead the Vatican delegation at the conference, making her the first woman ever to do so. As representatives of powerful nations lobbied to enshrine abortion as a universal human right, Glendon gave voice to the Church’s vision of true human flourishing, stating that “there can be no real progress for women, or men, at the expense of children or of their underprivileged brothers and sisters.” She continued, “We must move from a vision of human persons looked on as mere instruments or objects to one in which every person can fully realize her or his dignity and full potential.”

Glendon has never ceased speaking out on behalf of the weak and marginalized, particularly the unborn -- a commitment recognized in her service on the President’s Council on Bioethics and, later, her appointment as the United States ambassador to the Holy See. An expert on the 1948 Universal Declaration of Human Rights, her career has been dedicated to promoting its vision of the dignity of the human person, taking up John Paul’s exhortation that society must “rediscover those essential and innate human and moral values which flow from the very truth of the human being and express and safeguard the dignity of the person: values which no individual, no majority and no State can ever create, modify or destroy, but must only acknowledge, respect and promote” (EV 71).

Pope John Paul saw that women play a uniquely indispensable role in building the culture of life. “It depends on them to promote a ‘new feminism,’” he writes, “which rejects the temptation of imitating models of ‘male domination,’ in order to acknowledge and affirm the true genius of women in every aspect of the life of society, and overcome all discrimination, violence and exploitation” (EV 99).

Glendon’s unfailing commitment to this project has given her a unique ability to reach across divides in fruitful dialogue. Her further dedication as a devoted mother, trusted mentor, and beloved teacher has served as an inspiration and example of what it means to put one’s life and work entirely at the service of building a “civilization of life and love” (EV 100).

And so, at this great university dedicated to Our Lady, who is the Mother of Life, and in recognition of her unflagging commitment to “defend and promote the dignity of every human person, at every moment and in every condition” (EV 81), the Center for Ethics and Culture is honored to present the University of Notre Dame Evangelium Vitae Medal to Mary Ann Glendon.