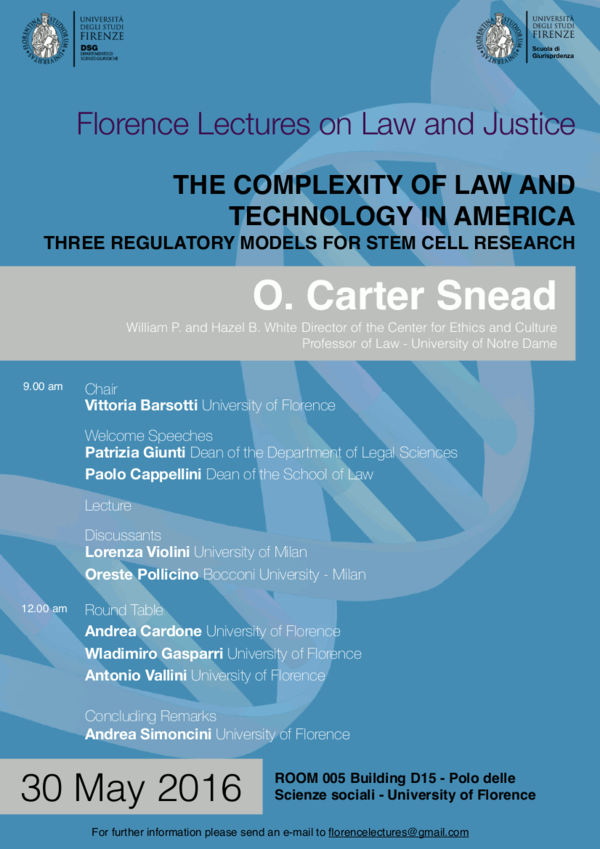 On Monday, May 30, Notre Dame Center for Ethics and Culture Director and Professor of Law Carter Snead will deliver the inaugural University of Florence “Law and Justice Lecture” in Florence, Italy. The lectureship was established to provide the opportunity for internationally renowned scholars to engage in university-wide interdisciplinary dialogue on pressing matters of law and public policy. The honor also includes appointment as a Visiting Professor of Law at the University of Florence.

Snead’s inaugural lecture, entitled “Three Regulatory Models for Stem Cell Research,” will analyze and contrast the US Government’s federal funding policies under Presidents Bill Clinton, George W. Bush, and Barack Obama as a means of exploring the complexities of American governance of science, medicine, and biotechnology in the name of ethical goods.

“It is a great honor for me to be invited to deliver the first lecture in this important initiative,” said Professor Snead. “The federal funding of embryonic stem cell research is a particularly rich point of departure for understanding the interplay of the contending ethical, legal, policy, and political visions at work in American public bioethics. This story – which involves literally every branch of the federal government (along with the political and legal reactions by several states) – reveals both the virtues and shortcomings of the American regulatory regime in dramatic fashion.”

Conference organizer Professor Andrea Simoncini, chair of the University’s Committee on International Academic Partnerships, welcomed Professor Snead: “We are honored for Professor Snead to deliver the first Florence Law and Justice Lecture. As one of the leading experts in the world on the legal, ethical, and public policy dimensions of embryo research, he is the perfect choice to be our inaugural speaker.”

Snead will introduced by Patrizia Giunti, Dean of the Department of Legal Sciences, and Paolo Cappellini, Dean of the School of Law. After his lecture, there will be responses from Professors Lorenza Violini of the University of Milan and Oreste Pollicino of Bocconi University, followed by a roundtable discussion including Professors Andrea Cardone, Wladimiro Gasparri, and Antonio Vallini. Concluding remarks will be given by Simoncini.

The University of Florence was established in 1321 and counts more than 60,000 students in its 12 schools.