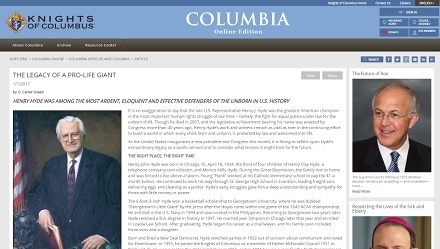 In a featured article in the January 2017 issue of Columbia Magazine, CEC Director Carter Snead profiled the late US Representative Henry Hyde, a bipartisan lawmaker and pro-life champion who represented the state of Illinois from 1975-2007. "It is no exaggeration to say that the late U.S. Representative Henry J. Hyde was the greatest American champion in the most important human rights struggle of our time – namely, the fight for equal justice under law for the unborn child," writes Snead. The namesake of the landmark Hyde Amendment, which has severely restricted federal funding of abortion since 1976, Representative Hyde "grasped that a society is to be judged by how well (or poorly) it cares for and protects the least among us, and that Roe v. Wade and the abortion regime it imposed on the nation reflected the antithesis of the human dignity and basic equality at the core of America’s identity."

Director Snead's full article is available via this link.