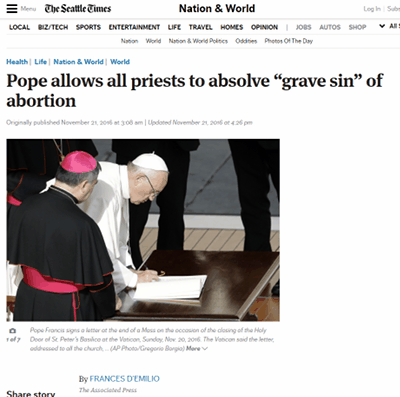 CEC Director Carter Snead was quoted in a widely-published Associated Press article about Pope Francis' Apostolic Letter Misericordia et misera, in which the Holy Father extended permission for all priests to release penitents from canonical penalties resulting from the sin of abortion. As reported by the AP,

O. Carter Snead, director of the Center for Ethics and Culture at the University of Notre Dame, noted that priests hearing the confessions of those involved in abortion had already been "a longstanding practice in the United States and several other countries."

Thus, Francis is essentially "reminding us that the core message of the right-to-life movement is one of radical hospitality, mercy and unconditional love for every member of the human family, including mothers and fathers whose lives have been broken by abortion and who now seek forgiveness," Snead said.