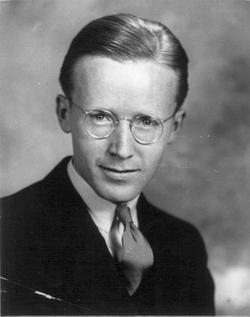 Frank O’Malley (1909–1974) was born in Clinton, Massachusetts, to Irish immigrant parents. In Clinton, a milling town, his father supported his wife and five children by working as a weaver in a cotton mill and was able to put his children through Catholic grammar school. As there was no Catholic high school in Clinton, O’Malley attended the local public school. After graduating from high school, O’Malley worked in a drugstore in Clinton for two years to save money for college.

O’Malley enrolled at the University of Notre Dame in 1928, residing first in Carroll Hall. At Notre Dame, he performed with the University Theatre and become associate editor of Scrip, a publication of students’ literary works and criticism. He was active in the Scribbler’s Club, a group of students who would gather at the Howard Rec Center to present poems, short stories, essays, and plays to their peers, who would then issue criticism (constructive or otherwise). O’Malley was also president of the Patricians, a group of students who worked to promote and sustain interest in the classics and literature at Notre Dame. O’Malley graduated as valedictorian in 1932, then a resident of Walsh Hall.

Upon graduation, O’Malley submitted a letter to Rev. Charles O’Donnell, C.S.C., then president of the university, to express his desire to continue his studies and to pursue a master’s degree in history. In 1932, just after O’Malley had earned his undergraduate degree, Father O’Donnell appointed O’Malley to a position as an instructor in the History Department while he pursued his master’s degree. After completing his master’s degree in history, O’Malley wanted to continue his studies in English, but at the time Notre Dame had no doctoral program in English. He was offered an opportunity to pursue the degree at Princeton but turned it down, deciding to stay at Notre Dame to finish a project he had helped begin: the reorganization of the English program.

O’Malley is most remembered for his teaching ability. During times of political and social turmoil and theological and philosophical change in the world and within the Catholic Church, students and faculty recognized O’Malley as a witness to the truth. As one of his former students, George McClancy (Notre Dame Class of 1952), recounts, “[O’Malley] revealed to us an understanding of things, made available through Faith and thought, which was different from and infinitely profounder than the mix of Parochial School religion and complacent middle-class values which [were] the norm everywhere in American Catholic culture.”

O’Malley revealed to his students the desperate need in the world for love, passion, and heroism—just a few of the themes explored in the works that were central to O’Malley’s classes. Though he never married, O’Malley lived in the dorms while at Notre Dame and expressed care for the soul of each one of his students, both in the classroom and in the dorms. He made sure that his students’ souls were alive, that they did not become complacent and lukewarm. Again, as McClancy recounts: “Christ was placed in the center of life, as someone whose suffering and love we all shared and as the measure of all value and all meaning.” With the aid of literature, philosophy, and theology, O’Malley gave his students the tools necessary to examine reality and get to the truth of things.

In honor of his dedication and his skill as a teacher, O’Malley received the university’s Sheedy Teaching Award in 1971. Today, O’Malley is a model for professors at Notre Dame: Each year, a professor exhibiting excellence in teaching is recognized with the reception of the Frank O’Malley Undergraduate Teaching Award. As English and American Studies Professor Tom Stritch (d. 2004) said of him, O’Malley was “the most brilliant teacher of humanities Notre Dame has ever known.”

Teaching involves a selfless dedicated concern for the unique working out (to adulthood) of each soul, a delicate sense of the peculiar needs and aspirations of each, for the peculiar way with knowledge, that is each one. This sympathy, this capacity to appreciate the requirements of another’s fulfillment...seems a function of prudence, perhaps an extension of the prudence of the father. The teacher must respect the delicate sacred interiority of each student, he must encourage the timid efforts at genuine utterance and integration. (Frank O’Malley Papers, University of Notre Dame Archives)

[I]n our concern with teaching and with the works of the mind, we must meditate seriously about the final relation of our existence, our relations to God. Man is not a being sufficient unto himself who can acknowledge his relationship to God or reject it, precisely as he thinks and decides. The nature of man is essentially determined by his relationship to God. Man exists only as one related to God: ‘where there is no God there is no man.’ And the way in which he understands this relationship, how seriously he takes it, and the consequences he draws from it—all this determines the nature of his life, his work, his vocation. (Frank O’Malley Papers, University of Notre Dame Archives)

We must open ourselves again to the elementary fact of the nature of things and persons. (Frank O’Malley Papers, University of Notre Dame Archives)

The Catholic College, as a College of Christ, should be a community of students and teachers centered in Christ….[T]he marrow of a Catholic College is not a system of thought, but a saving personality. (“O’Malley of Notre Dame,” by John W. Meaney)

I was particularly moved when I heard about Frank O’Malley’s role in saving the bricks of your administration building. Most of you know the story. The masonry was deteriorating, and some thought the time had come to replace it. Instead, Professor O’Malley reminded all who would listen, “These bricks contain the blood of everyone who helped to build Notre Dame.” (President George H. W. Bush, “Remarks at the University of Notre Dame Commencement Ceremony in South Bend, Indiana,” May 17, 1992)