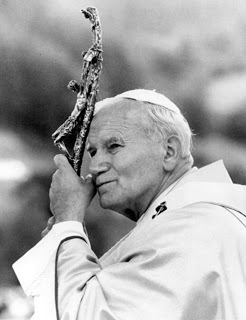 His Holiness Pope John Paul II, born Karol Józef Wojtyla, reigned as pope from 1978–2005. His legacy includes the considerable ways in which his life and work have influenced our own here at the Notre Dame Center for Ethics and Culture: His encyclicals Centesimus Annus, Veritatis Splendor, Evangelium Vitae, and Fides et Ratio were the inspiration for the founding of the Center. These central ethical encyclicals, together with other of his papal writings, further articulate the Catholic intellectual and moral tradition: the dignity of each person, the absolute character of basic human rights, and the fundamental importance of love and concern for others.

Centesimus Annus (“One Hundred Years”) was written to commemorate the 100th anniversary of Rerum Novarum, the great 19th-century encyclical that first explored in depth the implications of Catholic social teaching for modern economic conditions. It extends the doctrines of Rerum Novarum to make them relevant to the new problems of economic justice arising in the wake of the collapse of Marxism and a rise of an often vicious individualism in human affairs. “Now, as then, we need to repeat that there can be no genuine solution of the ‘social question’ apart from the Gospel,” he wites, “and that the ‘new things’ can find in the Gospel the context for their correct understanding and the proper moral perspective for judgment on them.”

Veritatis Splendor (“The Splendor of Truth”) focuses on foundational ethical questions and reasserts the traditional Catholic position that genuine human freedom is inseparable from appreciation of the truth. It also argues against many contemporary views—relativism, determinism, postmodernist skepticism—that impugn this relation between freedom and truth. “Patterned on God’s freedom, man’s freedom is not negated by his obedience to the divine law; indeed, only through this obedience does it abide in the truth and conform to human dignity.”

Evangelium Vitae (“The Gospel of Life”) reasserts the traditional Catholic doctrine of the sacredness of life and draws attention to the many ways in which this sacredness is under attack in contemporary culture. In its withering attack on what John Paul calls “the culture of death,” it provides both a devastating rebuttal to many current arguments that support technologies and social arrangements inimical to life and a rallying point for those who seek to oppose those technologies and social arrangements.

Fides et Ratio (“Faith and Reason”) is intended to address the bishops of the Church, philosophers, scientists, and theologians. The encyclical entreats all to question secular assumptions that undergird the modern academy, and it maintains, in a most countercultural manner, the unity of the pursuits of reason and the practice of faith: “Faith and reason are like two wings on which the human spirit rises to the contemplation of truth,” John Paul writes; “and God has placed in the human heart a desire to know the truth—in a word, to know himself—so that, by knowing and loving God, men and women may also come to the fullness of truth about themselves.”

At this moment, humanity should question itself, once more, about the absurd and always unfair phenomenon of war, on whose stage of death and pain only remain standing the negotiating table that could and should have prevented it. (Upon arriving in Buenos Aires, June 11, 1982)

Without in any way neglecting the acquisition of useful knowledge, a Catholic University is distinguished by its free search for the whole truth about nature, man and God. The present age is in urgent need of this kind of disinterested service, namely of proclaiming the meaning of truth, that fundamental value without which freedom, justice and human dignity are extinguished. (Ex Corde Ecclesiae)

Every generation of Americans needs to know that freedom consists not in doing what we like, but in having the right to do what we ought. (Homily in Orioles Park at Camden Yards, October 9, 1995)

Even beyond its typically religious expressions, true art has a close affinity with the world of faith, so that, even in situations where culture and the Church are far apart, art remains a kind of bridge to religious experience. (Letter to Artists)